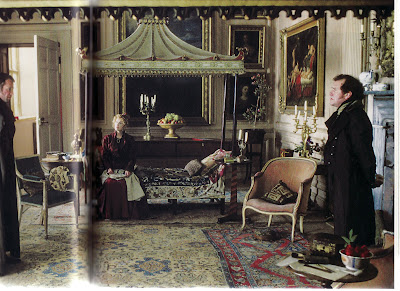 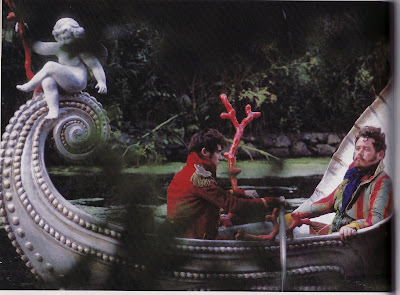 Initially this post was going to highlight the evolution of Regency style in the movies. Some cool art history professors I knew years ago often recommended films as a way for students to get better acquainted with furniture and design from different eras. Of course, the scholars intended movies to be used just as a supplement to books and museums since many films take poetic license and are not literal interpretations of a given period. 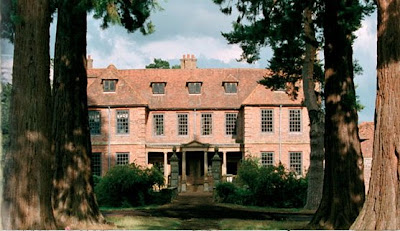 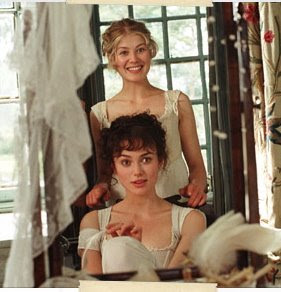 I asked the dynamic art historian and Regency expert, Emily Eerdmans, about films she suggests watching. Interestingly, her choices came mainly from the 1930s and 40s when Americans were under serious duress from the Great Depression, followed by World War II, and needed a form of escape. 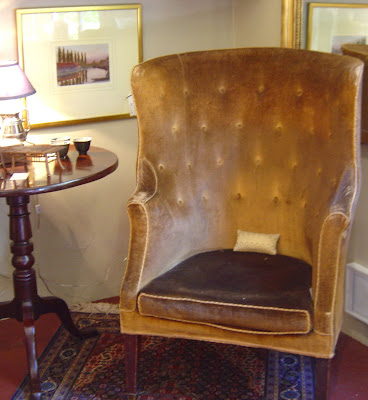 Before turning to Emily's list I want to mention that historically in times of stress people tend to turn either to classic, been-around-forever design, like the 1820 English Regency chair above (courtesy Katie DID and available at Jane Austen at Home) or to fanciful upbeat looks. The Bennett family home, as seen in the recent version of Pride and Prejudice, was out of necessity very much romanticized shabby. 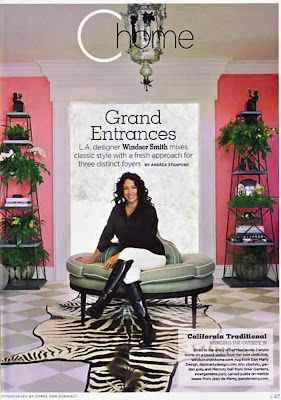 As you read about Emily's picks, you may notice that she and Jennifer Dwyer have similar taste in films. 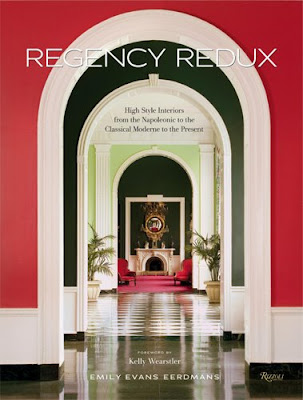 Here's some helpful background from Emily:

"Hollywood and the Regency style – could there be a more perfect pairing? Both epitomize glamour, high style, and - perhaps the most important ingredient – spectacle. It is then no surprise that movies have turned to the Regency period over and over again for inspiration.

During the Depression, the Regency style was embraced by decorators for two reasons: firstly, it was long on look, and secondly, it was relatively cheap. It didn’t take long for Hollywood set decorators to use it for the sumptuous penthouses, ballrooms, and boutiques of the onscreen swell set.

Here are a few of my favorite movies from this period from which the term 'Hollywood Regency' was born. Many of the sets feature lavishly swagged curtains, fringe galore, satin upholstery, and streamlined versions of Regency (and French Directoire and Empire) furniture."

Often it is only a dressing room or bedroom in an entire film that is given the Regency treatment, such as in Jean Harlow’s famous bedroom suite in Dinner at Eight. The white-on-white scheme devised to make the most of Ms. Harlow’s platinum beauty has been dubbed The White Telephone look and is reason enough to see this all-star classic. 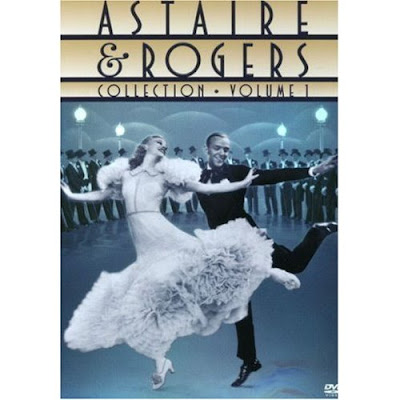 Anything Fred and Ginger

RKO was particularly known for producing movies on a shoe string. Luckily, the studio had Van Nest Polglase and his team of art directors to meet the challenge. Settings that popped and sizzled were created by emphasizing the graphic contrast between black and white and shiny and matte (black glossy floors were constantly polished between takes to maintain their high sheen). Neoclassical elements are most often introduced in a Deco Greco fashion, and given a flat, two-dimensional treatment. Scale was also played up and down – a playful technique that found its way into the interiors of Dorothy Draper and others. Top Hat and Roberta, both 1935, are particularly recommended.

Besides a delightful story line featuring Clark Gable, Myrna Loy, and Jean Harlow, the use of contemporary style is fascinating in this romantic comedy. While Gable’s office is decorated in the latest “less is more” modern idiom – which his mother compares to a bordello! – his home and particularly his wife Myrna Loy’s dressing room is done in the classical moderne style, with neoclassical inspired furnishings. Love that Lucite, illuminated dressing table! 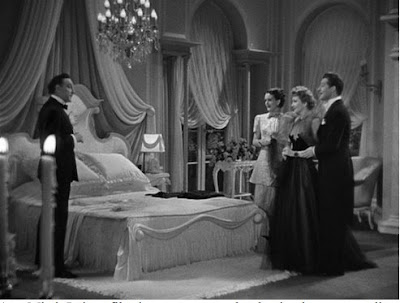 Any Mitch Leisen film is a treat to watch – having been an art director himself, he always played close attentions to the settings. Lots of money was lavished on this production and it shows! Here we see a later phase of the Hollywood Regency style that emerged in the 1940s. It is less pared down and moderne, and more bold and over the top. It also draws upon not just the Regency (or other neoclassical styles) but mixes in Rococo and Baroque as evidenced in the exaggerated headboard of this bed. Don’t miss the draped lampshade, a staple of the Hollywood Regency interior. Another Leisen delight: Easy Living – the hotel suite is outrageous! 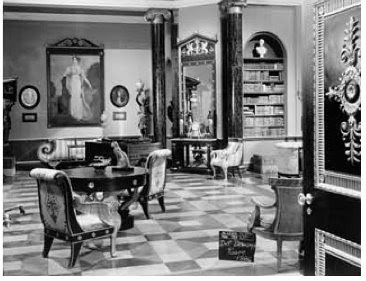 For a more pure and academic portrayal of the Regency Style, there is none better than the house of Hurd Hatfield in The Picture of Dorian Gray. The stunning settings for this film communicate the pomp and stateliness of the Regency, and, to my eyes, still looks incredibly chic to this day.

For a full overview of Regency style past and present, be sure to get a copy of Regency Redux. Black-and-white images above are courtesy Emily Eerdmans. Images one and two, at top, are © Mira Nair, Vanity Fair: Bringing Thackeray's Timeless Novel to the Screen, Newmarket Press, 2004. See also her Regency-era film, Vanity Fair. Images three and four are from Pride and Prejudice.
Posted by Style Court at 6:01 PM

Loved this post - a marriage of two of my favorite things - and, Wife v. Secretary - I had never heard of it. Clark Gable! Myrna Loy! How could I have missed this until now. It's on the short list. Thanks for such a well-researched post.

Patricia -- glad you enjoyed it. I think Jennifer D. is a huge fan of wife c. secretary too.

I have to thank Emily for being so generous with her time. What great insights. So many details to look for in the films now.

OOOOOOOOOOH.....Love the oldies!
They are the best! Wonderful post with lots of information!

Wow! What a fantastic post, sc!
I love the oldies.....they are the best!....Enjoyed this tremendously!

Hi Mimi -- again, I have to thank Emily!

oops....both of my comments made it....I was told the first one didn't go through and to try again!

Lots of new movies to locate. This will be fun homework.

Why do I love that tiny little pillow in that giant chair? I just love it:)

Hi Chakra -- thanks! It is the tiniest pillow ever :)

I am going to copy and paste this list right into my Netflix queue.

This is a great list, and there are a few I haven't seen before, like "Midnight". Must rent that! I love Dinner at Eight- fabulous sets.

That Emily...she is so talented! Thanks for this post. I am often inspired by interiors in film...and Emily has some great suggestions. I am adding them to my Netflix right now.

As I'm known as the dancing decorator, I too love all things Fred and Ginger.
As a former film student at NYU Film School, and former employee at The Museum of Modern Art Film and Media Dept. (I worked in the Circulating Film Collection with Margareta Akermark, and in The Film Stills Archive with Mary Corliss) I appreciate the way Emily summarized Hollywood and Regency.
I would love for her to talk about historical set design from that era: Marie Antoinette (Norma Shearer); Catherine the Great (Marlene Dietrich; DuBarry Was A Lady (Bob Hope); anything Dickens.
I'm sure it would be equally fabulous!
BTW did you and I have the same professor giving us the same assignments :-)
As ever, a lovely and thoughtful post: Thank you.

Hi VV, thanks for such a thoughtful comment. I'll make sure Emily sees it.

Wow I really want to see 'Vanity Fair' now. Is that the one with Reece Witherspoon?

yes it is! enjoy.