Definition of the Day: Khotan Rugs 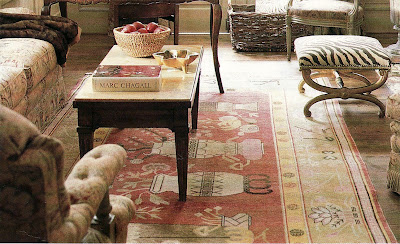 Without meaning to sound hoaky, I have to say some of the most beautiful things occur when different cultures come together. Khotan rugs are an example of this. 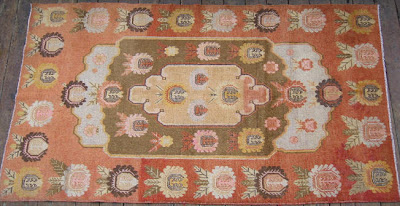 With a mix of Far Eastern and Central Asian design details, the rugs traditionally have been handwoven in Chinese Turkistan, in or near the old city of Khotan. Scholars may have different views on the fine points, but some core characteristics of these rugs often include: triple-medallion patterns with stylized vases; borders with a Chinese wave motif; and in some cases stylized chrysanthemums that almost "read" as a geometric. 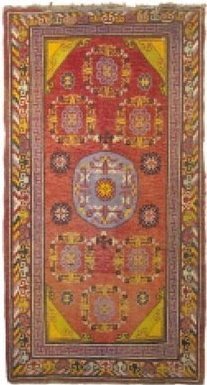 Historically the dyes were quite vibrant; softer pastel shades -- so pleasing to some decorators -- are the result of fading.

Image at top is from a Dan Carithers-designed library courtesy Southern Accents;
Image two is a 1930s example courtesy Allan Arthur;
Image three is from Hali, May-June 2006.
Posted by Style Court at 7:23 AM

Patricia, Paul -- glad you appreciate these too. I'm loving them more and more.