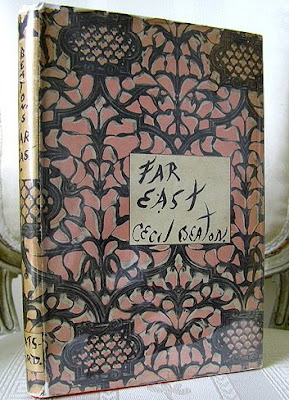 I used to be the girl with many handbags, now I'm the woman with many first edition books. Brace yourselves for a possible flurry of posts related to Cecil Beaton's Far East because I just ordered a copy from Paris Hotel Boutique. Isn't the cover striking? I'm anxious to learn more about the pattern.

Most people are familiar with Beaton as the fashion photographer for Vogue, and as the costume and set designer for films such as My Fair Lady. But during World War II he was assigned by the British Ministry of Information to cover the war in the Middle and Far East. Apparently the assignment was a good idea; not only are Beaton's pictures of India, Burma, and China widely respected, his writing about the historic turning point is said to be superb. I'm also looking forward to seeing his sketches.
Posted by Style Court at 10:11 PM

Pea green with envy and on the edge of my seat for your reports. It was worth it for the cover, not that that is how I judge.

She has the BEST books - I love her site - I've ordered a few things from her. It turns out that her husband and I went to Israel on a Singles Mission in our 20s and he dated my best friend. SMALL world!!! I love her store - she has the best things and great customer service too.

Patricia -- I know what you mean about the cover. I'll keep you posted.

Beware, I may just have to come over and beg, borrow or steal that amazing book. My heart is "beaton" a little faster...that cover is genius.

thanks so much VV !

Patricia VE -- you can borrow it anytime :)

So excited to read your posts on this book. Looks like a great one!!! (Shoes and handbags are a thing of the past with me- it's all about books!!)

Jennifer -- more things we have in common!

Enjoy your new book. Looking forward to your review.

What a wonderful find!! I am wondering if the cover design is some sort of wisteria flower — it has that droopy quality.

Many British artists including Eric Revilious and Edward Bawden (personal favorites of mine) did war art. And what is especially interesting is that these two were doing paintings and drawings!

Bawden has drawings done on a troopship at Dunkirk as well as paintings of individual soldiers, interment camps and refugees among other subjects. Quite amazing when you think of it!

Please post many things-- I bet that book is wonderful! I was just in Providence looking for a little gift and thought of you!

This is going to be good...I look forward to it. The book problem does present challanges but such joy of discovery. Once bought, always kept. My husband and I both share this problem. He has aquired the most amazing collection of pop-up books...found one at a time...which of course take up a lot of room. Oh Well.

Ms. Wis and Stljoie -- you always have interesting info to share. Thanks for the enthusiasm. I also think the pattern looks kind of Mughal in origin. We'll see...

Laura -- hope you got something good!

Millie -- always, thanks for stopping by.

I found the re-issue of his diaries at BT... I must start reading them!

meg -- i remember when you did! what a score.

i have never head of this volume before now, so i'm excited to hear of your reports! by the cover alone, it is FANTASTIC! great find. i'm still hoping to stumble on a copy of his "the glass of fashion" in a thrift shop one day...

ps- books NEVER go out of fashion, handbags do. course this if from a guy who doesn't get the whole bag thing anyway, so what the heck do i know? :)

Christian -- it's too bad we all don't live near Meg's Book Thing!

I love what you said about books never going out of fashion. Reading is where it's at.

Another great find! Journals and autobiogaphies intrigue me. Gorgeous cover.

You have passed on the old book obsession. I am trying to learn to love to read them as much as I love getting lost in the picture and let them beautifully adorn my shelves.

Did you know he had a fabric collection? http://www.cecilbeatonfabrics.com/main.html

Karena and Elly -- it's great to hear from fellow vintage book enthusiasts!

Elly, I think The Peak of Chic wrote about that fabric collection -- thanks for the reminder.

Yes, the covers and images are a huge part of the appeal. It's fun to dive into the text on weekends :)

hi sacheverelle -- title and description match, yes. sounds like the books in this link are missing dust jacket. good luck!

What I mean is that I noticed the books range from around $10 to over $200 and I think this is based on the jacket, condition etc. Lack of dust jacket.

Yay I scored one too! I'm not picky with books, as long as I can read the book & see the pics & nothing has been clipped or ripped out I'm happy.