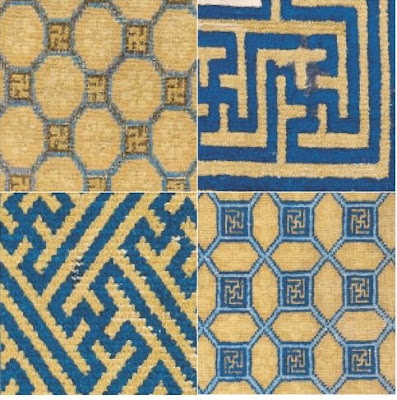 I'll admit I enjoyed the Beijing Games far more than I expected to. Of course the swimming, diving, track and gymnastics were extraordinary, and it was nice to briefly get wrapped up in something outside my usual focus. But as someone who is fascinated by China's artistic tradition, I also appreciated the Olympic venue and accompanying news coverage. 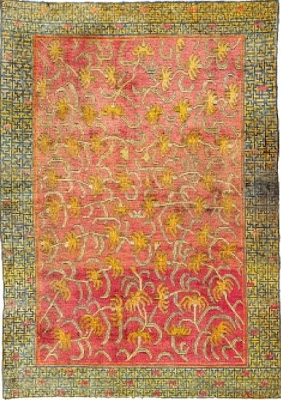 If you too are experiencing a little withdrawal, here is a small fix: a glance at classical Chinese carpets and rugs. Details mostly, from Hali, January-February 2006. 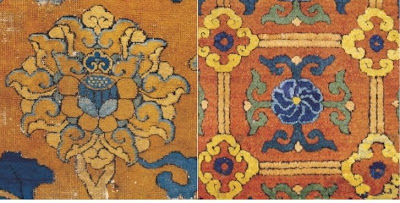 According to Hali, specially made pile carpets covered the floors of the main halls within the Forbidden City during 500-plus years of Imperial rule. (Construction began in Beijing in 1421.) Today fewer than 600 of the classical Chinese carpets and fragments survive. As with most things Chinese, the geometric and stylized animal motifs were rich with symbolism.

The endless network of fret patterns (sort of lattice-like) that you see in most of the examples here are composed of "wan zi" symbols which represent the number 10,000 and a wish for longevity. Contemporary textile designers seem to be heavily influenced by these traditional Chinese geometrics. 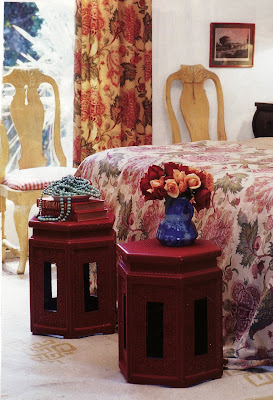 If you look quite closely at this detail from a Mary McDonald-designed bedroom (image via House Beautiful) you may notice a Chinese-style carpet in yellow and cream. 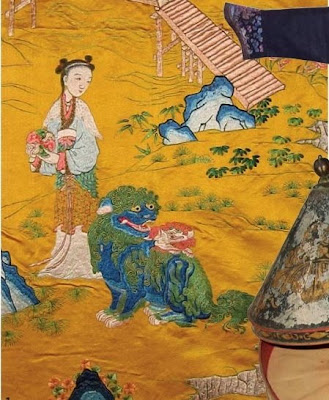 Love your Chinese inspired entry with the wonderful decorative pieces especially the gorgeous rug........I can't say that I really miss the Olympics or Beijing but I thoroughly enjoyed watching while it was going on.....I am a true PHELPS PHAN!! Go USA!
Best Regards,
Lee

I think it's so awesome that you got to go to the Beijing Olympics. Of my several trips to China, I have yet to make it to Beijing or Shanghai. Funny enough I'm doing it sort of backwards where I've been going to the remote regions first but Beijing is definitely a place I want to see. Thanks for sharing your wonderful insights.

I actually watched the games on tv - sorry if what I wrote was confusing!

Thanks for appreciating the decorative elements here. Karen it sounds like you've been able to explore some wonderful areas. And Lee, I guess by now everyone understandably has Olympic fatigue no matter how much they enjoyed the games :) Thanks for stopping by.

Hi Courtney
Beautiful examples. I love the fretwork patterns you show here. My mother-in-law had a rug made in China with a medallion in the middle such as this. Somehow I was the lucky recipient when the rest of the family did not have a place for the rug anymore.

Hi Katie -- sounds like the rug is among the many wonderful things you've had the vision to appreciate. Things from your mom and mother-in-law.