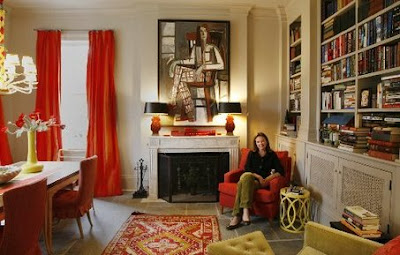 These images of New Orleans decorator Heidi Friedler's Uptown library are blurry so I hesitated before posting them. But I wanted to share her striking collection of numerous red boxes -- grouped with oh-so-chic cinnabar lamps -- on the mantelpiece. According to Renee Peck's Times-Picayune article, the objects range from "fine lacquered pieces to rubber jars and a couple of funky holders from Target..." It's not clear from the picture, but Friedler has worked more than twelve boxes into the arrangement. 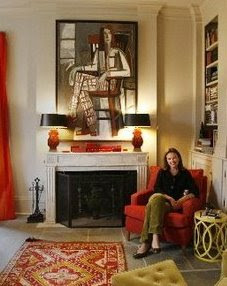 While green is the decorator's favorite color, here red evolved into a major player: the hue is in a lively Oushak rug and curtains. Friedler even painted an old magazine rack for more pops of red. And although this room is a place for quiet adult conversations, it does hold an inherited 1950s Tommi Parzinger dining table that expands to become the perfect spot for school projects or family games. (The large abstract of a seated woman is by Dallas artist David Bates.) 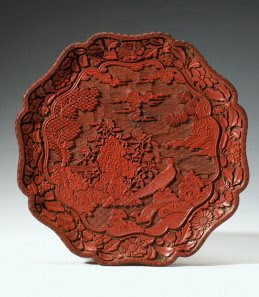 Chinese plate with long-tailed bird in a garden, circa 1368-1400
The Avery Brundage Collection, Asian Art Museum.

According to the Asian Art Museum, cinnabar is a red crystalline form of mercuric sulfide found in many parts of China, and it was one of the pigments most frequently used to color the lacquers made at the Ming dynasty court workshops. 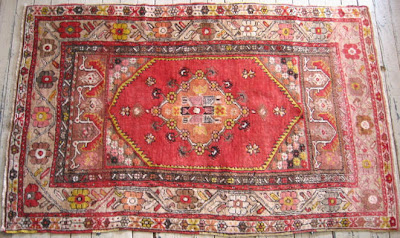 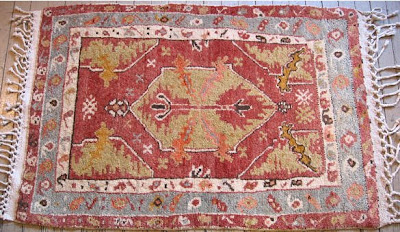 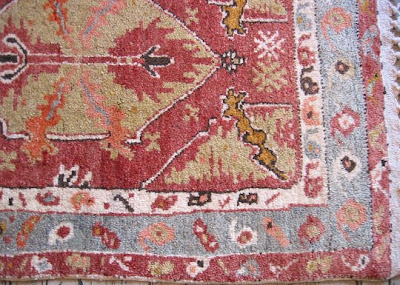 The small mid-20th-century Turkish Oushaks above are from Allan Arthur Oriental Rugs on Bennett Street in Atlanta. Just a reminder: for a wide range of informative links and sources, visit his site Cyber Rug.

Friedler images are by Kathy Anderson
Posted by Style Court at 4:59 PM

I am not a red person but I am staying a wonderful friends home and she has little touches of red everywhere.. I notice whenever I see these dabs of red I feel invigorated...

Diane -- nice observation. Red is so warm and energizing!

What a gorgeous room. The colours are so perfectly balanced. Thanks for sharing!

What a beautiful room! Looks like a room with lots of soul! I could happily hang out there!

Camilla, yes, I think it's filled with objects that have meaning to the family.

Not only does she love red, but she looks well read.
I love red too. It all goes back to my red mary-janes shoes in kindegarten. I just could not wait to wear them and my mother said, I never wanted to take them off.

I love the library, but I especially like those Oushak rugs!

Jennifer -- makes me want to do a whole room around one of those rugs :)

Its lovely, and the red plate you've found is really wonderful. Its hard to tell in the photos, but I'm interested in that end table. Is it bamboo?

Hi Balsamfir, it might be painted wood or metal -- the one beside Heidi? Try Tonic Home or eboniste.com for something similar :)

so quintessentially nola, this one's going in the inspiration files. you have such an eye for good southern design!

Thanks jessica! Glad you're keeping this one. Heidi has such flair.

Oh I love it. I have been trying to add touches of red to my living room and had some in area rugs and a wonderful cinnabar vase from my husband....but this past week I went into an antique store going out of business and there on the floor was a predominately red 17"by11" oriental carpet with 3 foot border and a central medallion. I said "I really want this" and was told if I could wait until she sold out I could have it for $125.00 and I GOT IT!!! Of course this means everything in the room has to be moved out... which of course means this is the time to paint. I'm soooo excited.

stljoie -- sounds like you had a successful weekend! Congrats on your find.

i also love the portrait over the mantelpiece. it's fantastic.

I love that room! It looks modern, yet cozy and interestingand very liveable. I like the touches of red very much!

I'm a big fan of red ! I love her home ! this rug looks gorgeous

FUN finds - I love red too!