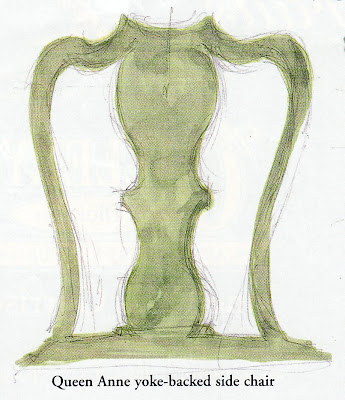 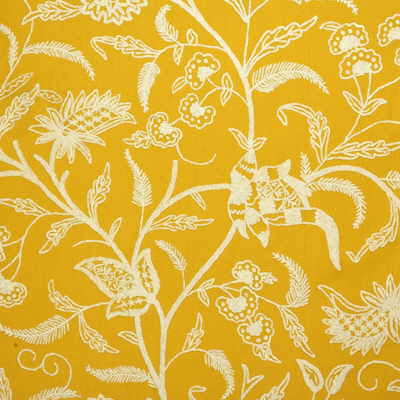 My mom's godmother has notes tucked under much of her furniture to indicate which daughter or grandchild should receive the piece when she's gone. We don't do notes in our family, but conversation about who could best use the sideboard is pretty typical. Since Jennifer Dwyer's parents have an exceptional collection of antiques, I was curious to know if there is a special table, chair, or cabinet she would love to one day use in her own home.

Her response: "An 18th-century Early American Queen Anne chair with the original crewel work seat. The reason I love it as much as I do is that not only is it a beautiful piece, but the craftmanship and detail of the crewelwork is really beautiful." Jennifer adds that work like this is seldom seen today. There is a sister in the picture too, so "We'll probably take turns with custody of the chair," she laughs. 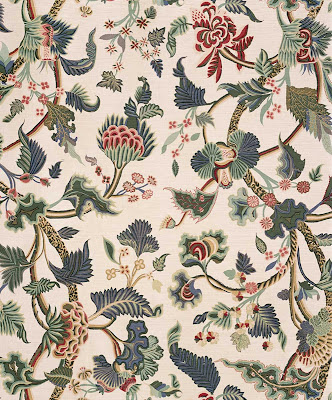 Crewel, according to Caroline Clifton Mogg, is a name for worsted thread, a wool blend that is thicker than silk or cotton thread. Basically crewelwork is a type of embroidery that originated in England. Traditionally it is done in colored yarn on wool cloth or cotton sheeting. Sinuous climbing trees and flowers are common motifs, and crewelwork was all the rage in the 17th and 18th centuries. (Textile Style, Bullfinch Press 2000)

The yellow fabric shown above is "Jesi Crewel" in Sun, from Lee Jofa. The second example is Bennison's "Crewelwork," a favorite of Julia Reed's. Antiquarian George Read did the chair illustration for Southern Accents.

Leave it to Jennifer to share and not squabble!

That's right Patricia! Imagine how beautiful the real thing is.

I love crewelwork and have always thought I mighthave something with it someday. I really love the yellow Lee Jofa you have shown. Very sunshine-y.

Katie -- I'm a big crewelwork fan too. Glad you like the yellow!

Courtney, I love the images you've shown here. Can't wait to find out what others hope to inherit some day!

Jennifer -- so glad you didn't mind sharing. Thank you!

I love crewel, too. I especially like the modern designs of Katherine Shaughnessy at woolandhoop.com

I think her designs would make lovely pillow!

Laura -- thanks for the tip!

my mom always says she's glad she's not going to be here to see me and my sister go at it!!!!! too funny! it's sort of a joke.