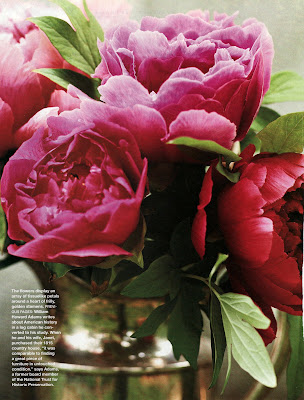 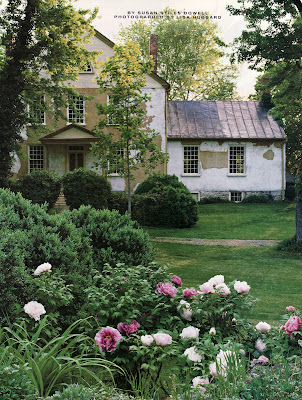 I'm a little late with this. Should have posted these images in May. But they are too exquisite to wait until next year. And there is a timely connection to China. 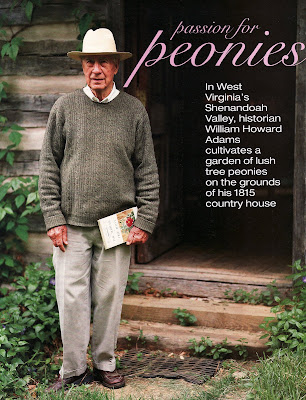 Inspired by a visit to Beijing's Summer Palace, where he spied the last empress' peony garden, historian William Howard Adams planted 40 tree peonies at his Shenandoah Valley house, Hazelfield. Adams told Southern Accents that the empress' blooms were massed against a boulder brought in to simulate the plant's rugged habitat in Northern China. This brought to mind the similar limestone outcropping at his own West Virginia home, and he decided to duplicate the display. 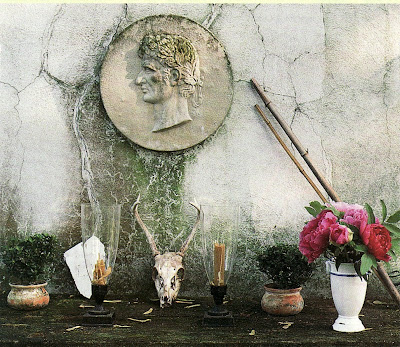 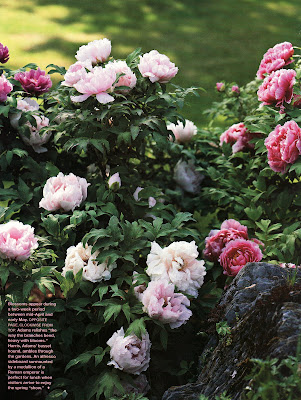 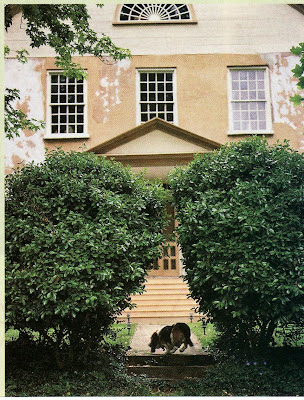 Click here to read the NY Times piece about the very un-renovated Hazelfield. Adams is the author of many distinguished titles including Nature Perfected, which became a 12-part PBS series.

That front elevation of the house takes my breath away. This is my favorite image EVER on your blog.
I wonder if he'd mind if I moved in? My husband would probably miss me... BUT GOOD GRACIOUS... I'm in love!
Courtney, beautiful post!

Wow Erika! It was worth scanning then :)

I would love to own this house too. I'd like more than one bathroom and an outhouse but otherwise I definitely would not over-renovate either!

Hi Courtney!
Just popping in to say I love to sit and read through all of your posts. They are so visually wonderful and they always get me thinking aobut what I can be doing in my own home. It's just always a pleasure!

Katie! What a nice compliment! Thanks so much. Happy weekend to you.
C

A lovely post indeed!! A gentleman it appears, who loves to share his talents. What an eye for beauty he has: the home, the flowers, the lifestyle. Wonderful start to my weekend....thank you. Ginny

Ginny -- he is so generous to share. Glad you enjoyed this!

Courtney - thoroughly enchanted by these images, then I paused, clicked, then began scouring my jumble of files. I have this same layout - in fact, I used the images of the peonies in my powder room post last summer. I was so engrossed in the peonies, I'd overlooked the house. What a great way to kick off the weekend.

Patricia -- I forgot about your powder room post! I loved that one.

Thank you for directing me to that article! What a beautiful piece!

Oh. Swoon. Gorgeous! Thanks for that! I think I can smell the peonies from my computer! The house is stunning!

Hi Linda -- thanks for stopping by. I think I can smell them now too :)

Oh Courtney - what a LOVELY post - did you knew I'd love it? ... its the flowers

Incredible place! I love old places like that in the country.

I remember this story ... such beautiful photography!

Oh I love peonies so much, they're hard to grow here.
Wonderful post Courtney.

Hi Robyn -- nice to hear from you!

I used to own Hazelfield. A financial setback forced me to sell it to the Adams family. Although I have always regretted not being able to remodel and live in the house myself; I have always admired the sensitive remodeling that Mr. Adams and his wife did to the house... However I still dream about it all these years later.