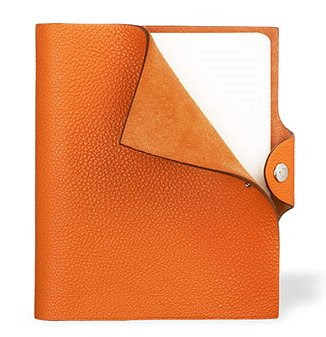 Both patrician and unconventional, Baroness Pannonica de Koenigswarter was a passionate supporter of Jazz from the early 1950s to the late 1980s. In the 1960s, armed with two Hermes leather notebooks and a Polaroid, she asked struggling -- and later famous -- musicians to share three personal wishes. Pannonica, or "Nica" as she was known, recorded their thoughts along with photos. About 40 years later the French publishing house, Buchet Chastel, made the notebooks into one volume, Les Musiciens de Jazz et Leurs Trois Voeux.

It would be a fun summer project to do something similar; think of a group of people who fascinate you -- designers, artists, children, teachers, friends -- and record their wishes.

Orange notebook available through Hermes. See the original contents of Nica's book at World of Hermes, part of the main Hermes site.
Posted by Style Court at 9:53 PM

This has got to be one of the best ideas I've heard in a long time. My brother-in-law works for the Smithsonian in Washington and has the luck to be tasked with collecting oral histories from some of the great Latin musicians of the 20th Cent.

The Hermès notebook is the icing on the cake, though. I've made do with Moleskine notebooks and, thanks to your post, now they simply won't do ; }

E & E -- So glad you find this inspirational! I thought it was such an interesting idea. And your brother-in-law, what a job :)