Something Red, Something Shabby 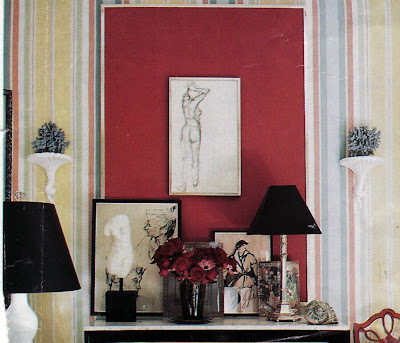 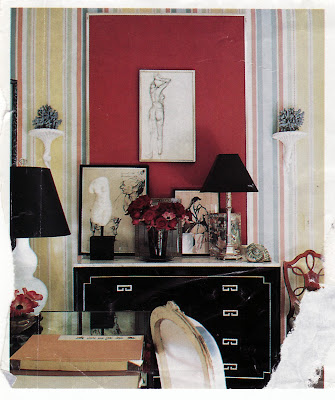 Like Jennifer Boles and Charlotte Moss, Toronto designer Jane Hess has an amazing archive of vintage magazines. In fact, her 40-year collection of Vogues was chronicled in the April 2008 issue of Canadian House & Home. 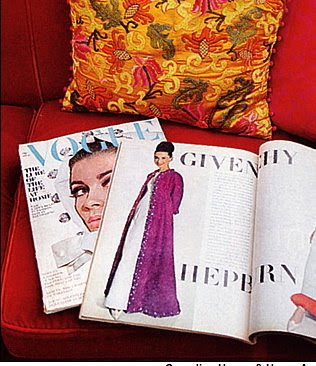 In response to my question in an earlier post, "What tastemaker said every room should have a touch of red?" Hess found one possible answer: Lady Juliet Duff. According to Hess, the English aristocrat believed an interior should have one red piece and a touch of the shabby.

The painted bulletin board above, in an early Miles Redd bedroom (Elle Decor, March 2001) definitely adds a punch of red. Shabby is open to interpretation. I don't see anything really threadbare or peeling here, but I'm guessing some of the accessories on the chest are vintage and time-worn.

Click here to learn more about Redd's inspiration. I think a chic bulletin board is a brilliant alternative to expensive art. Unframed sketches found at flea markets or student art shows could be rotated on it.

Over the next few days I plan to highlight other rooms with "something red and something shabby." Stay tuned.
Posted by Style Court at 7:45 AM

Ok i LOVE this post, and cannot wait for more rooms with something red and something shabby!!

Michelle -- I think you have some very chic red pieces in your apartment!

Oh, wow - you've been busy! I absolutely LOVE all of your recent posts! So pretty! I'm going to sit down and read them all thoroughly tonight!
xx
Anna

Hi Style Court - I've just stumbled upon your site last week and have fallen in love with it! Todays post on red has me drooling for more!! As a brunette (who looks good in red) I tend to drape my rooms in it! This bulletin board idea has given me the perfect solution for a decorating client in Amsterdam (where I live) who is wanting a touch of orange in her office! We're filling her book shelves with Hermes boxes to use as storage and I'm taking a tip from you and painting her bulletin board orange! Great idea!! Looking forward to being one of your blog subscribers!
The Antiques Diva (TM)

Lovely photo, I think the sketch on the wall fits the shabby category as it is unfinished and rough- rather than polished and formal- giving the room a more human feel.

Anna -- thanks! When I posted the Julie Baker home I thought of you :)
xx
Courtney

I agree with you and Duff about adding something red and something shabby to a room. First, the shabby bit keeps a room from looking too perfect and too stale. The red adds some sizzle- just look at all of those wonderful Hadley rooms!

Jennifer -- articulate as always! I love how you summed it up.

Courtney - I sometimes have something red - but thanks to the boys, there is always something shabby in each and every room of the dream house! Can't wait for the posts to follow.

I've always had something red ! I love this post !

I'm pretty sure Diana Vreeland is responsible for the "touch of red" comment!