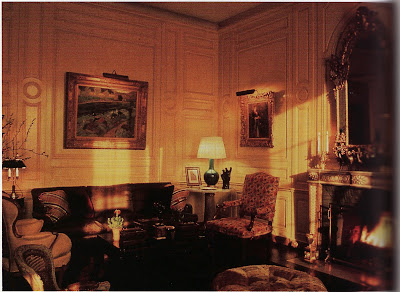 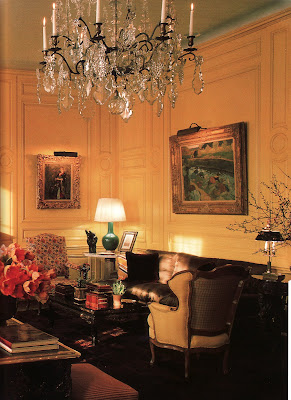 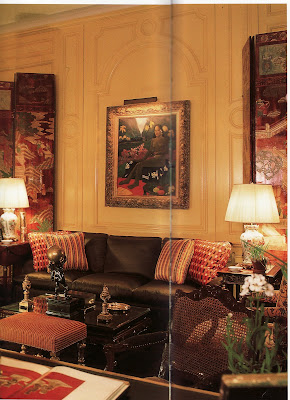 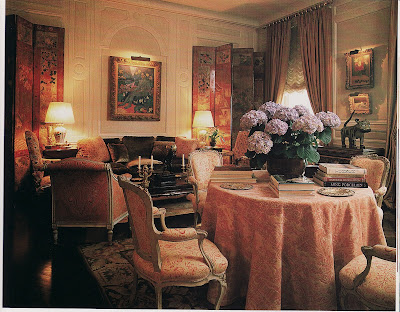 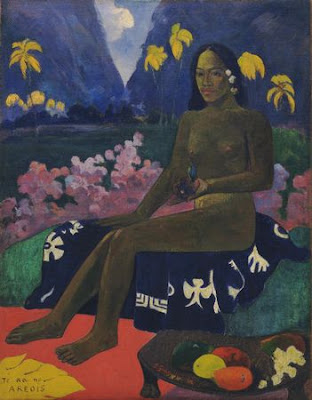 [Above, Paul Gauguin's The Seed of the Areoi. 1892. Oil on burlap. The William S. Paley Collection]
I'll never know how it felt to be a guest of Babe Paley's and sit in her ravishing taxicab-yellow drawing room. But for a few weeks I was inches away from one of her husband's prized possessions: Picasso's Boy Leading a Horse, 1905-06. 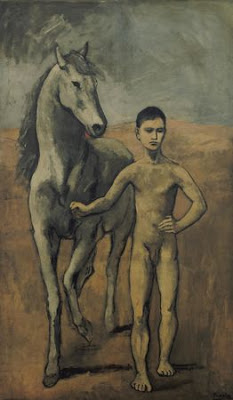 During the High's exhibition, Picasso: Masterworks from The Museum of Modern Art, I was frequently stationed by the painting for cocktail parties, ready to greet guests and answer questions. Often times there were patches when it was just me, the Picasso, and a security guard. 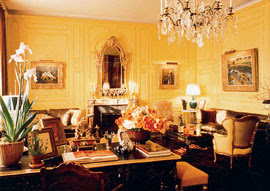 Bunny Williams has written often in various books and magazines about how, as a young design assistant working for Parish-Hadley, she was staggered to see the Picasso in the entry when she delivered samples to the Paleys'. And when she entered their famous yellow room with its lacquered walls and Paul Gauguin's The Seed of the Areoi hanging between two Oriental screens, she thought it was the most beautiful thing she had ever seen.

As you probably already know, Sister Parish surprised everyone by advising taxicab-yellow as a backdrop for the Paleys' stellar art collection -- cream was the expected choice. The risk paid off and the room became one of the most celebrated mid-century interiors. Today it often pops up on top ten lists of the most memorable rooms. It's definitely in my top two.

Of course, there is another iconic mid-century yellow room. Nancy Lancaster's "buttah yellow" has inspired countless home owners such as Julia Reed, below. 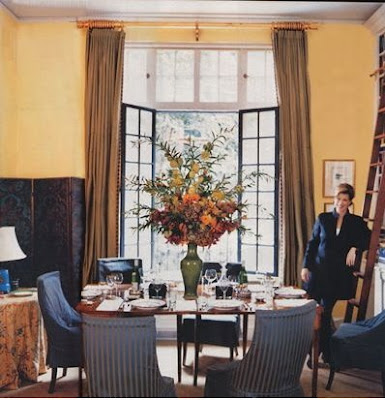 Still, there is something about the Paleys' room that makes it a quintessentially 20th century masterpiece. (Even though it is filled with serious antiques.) The answer probably always comes back to the art -- all the best of the modern era up to that point -- but the tailored brown sofas and unfussy batik fabrics are also a fresh foil for the formal pieces.

No doubt I'm a pushover for the Paley residence because their art collection encompassed works from my favorite artists, and I have happy memories of the exhibitions, Matisse: Masterworks from The Museum of Modern Art and Picasso: Masterworks from The Museum of Modern Art. A highlight of those shows was Kirk Varnedoe's talk. He was an amazing speaker (and my all-time favorite Charlie Rose guest). If you ever have an hour or two to spare, check the Rose archives for past episodes that featured Savannah native and art historian Varnedoe speaking so eloquently about the modern era. He was fast paced and illuminating.

The Picasso and Gauguin are currently in MOMA's collection. Image one at top is from Sister, St. Martin's Press, images two and three are from Albert Hadley, Rizzoli, image four is from Designers on Designers, McGraw Hill, Julia Reed collaborated with Thomas Jayne as seen in Southern Charm
Posted by Style Court at 10:24 PM

Any excuse to watch Charlie Rose is fine by me. I am in love with him.

Ok, I am loving this Charlie/Kirk video. What an education. I am so glad you posted this.

I know! Don't you wish you could have been in some of Kirk's classes in the early days?

I love the idea of that taxi yellow! It must have been so cheery.

i have never seen a photo of the Paley room before. very striking--the yellow is such a brave color.

kelley p -- glad to introduce it to you!

I love yellow , and I've already seen this room but every time I see it , I love it more and more..For me it is the perfect room ! Very interesting post about her . i can not believe you were standing by a picasso's painting during a cocktail ?

Melanie -- the guests came through the galleries but food and drink was on another floor-- I was a docent :)

We mixed our own yellow for our first living room and have used it ever since. Now for the Picasso... or a Léger or something. You know, just to round things out. (I'd happily settle for cocktails in near proximity, though.)

The color sounds splendid. I love it when people have a passion for a certain color and repeat it in various homes.

Thank you for this post. I agree with you, Kirk Varnedoe was brilliant and a great speaker. Some years ago, I had the pleasure of hearing him lecture at The Art Institute of Chicago. You may be interested in reading a recent article in the Home & Garden Section of the New York Times, that profiled his widow, the artist Elyn Zimmerman. The article was entitled "Keeping Watch Where Rocks Abide" and appeared on Thursday, April 24th. I am a computer neophyte and don't know how to attach the link -- but I am sure you can google it.

Thank you, Courtney, for brightening my mornings. Yours was the first blog (other than my daughter's) that I started to read. Through you I have discovered many wonderful writers who share my interests in design.

Your comment made my day. Thanks! I guess all of us who heard Varnedoe speak are quite lucky. I will look for that article.

So glad you stopped by.