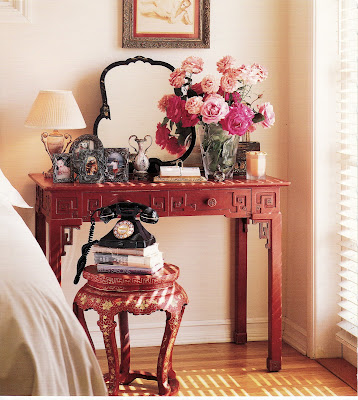 I was tempted to emulate Mrs. Blandings and ask you to identify the designers behind these 1990s bedrooms. But the pop quiz is her clever idea, her intellectual property. Instead I'll cut to the chase. Melissa Wallace Deitz did the room above. 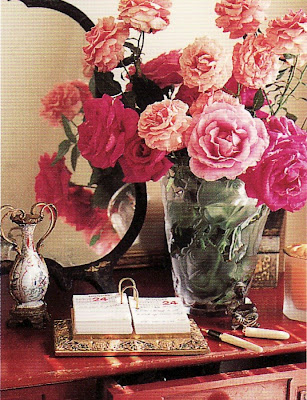 Located in the Hollywood Hills, her bedroom was dominated by creamy whites but punctuated with the red 1920s Chinese desk used as a bedside table. For more punch, Deitz added a gilt-decorated red lacquer Chinese stool circa 1900, as well as a chinoiserie mirror. Does anyone remember if it was Eleanor Brown or Sister Parish who liked to see one red piece in an interior? I'm still searching for the answer. (Photos, Jeremy Samuelson.) 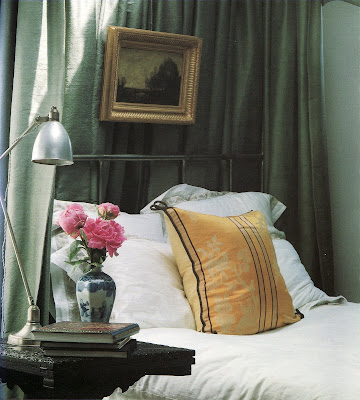 Early Michael Smith. The California master's skill with refined, eclectic bedrooms was already emerging. He draped a steel bed with gray Thai silk and hung a small painting above the headboard. 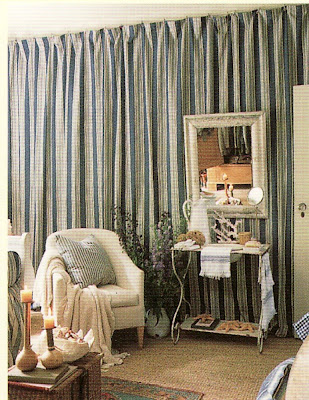 Stephen Brady attached striped ticking to his walls with hooks, a less expensive alternative to upholstering walls that creates a tent-like feel. 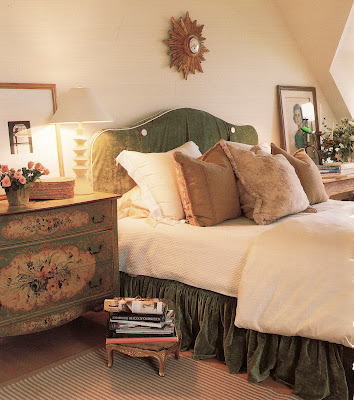 And a little vintage Stephen Shubel. All images are from Diane Dorrans Saeks' book, California Bedrooms.
Posted by Style Court at 8:08 AM

Courtney - you can "pop quiz" away any time you like - and probably do it better. A super post - and I am not familiar with this book. I tried to buy a very small desk from Suzanne Cooper a few years ago to use as my beside table and when she discovered the purpose, she wouldn't sell it to me. I wound up in the front hall of a friend and it always make me a bit wistful when I see it. The chinoiserie mirror is on my list too. Inspiration abounds here at Style Court today!

Patricia -- I LOVE desks and consoles as bedside tables. Of course Suzanne Cooper seems to have excellent judgment. What was her objection? Just curious :)

Jane Hess emailed in this answer:

"Re your question about one red piece. It was English aristocrat Lady Juliet Duff who said that: something along the lines of, 'an interior should have one red piece and something shabby.' Jane Hess, Toronto."