The House in Her Head 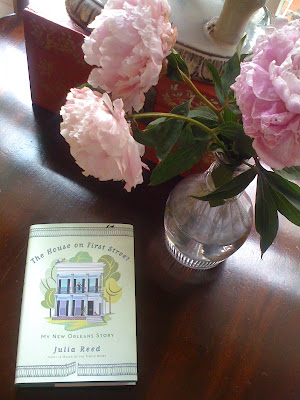 I'm on a deadline for work this week but found myself staying up late last night to finish Julia Reed's The House on First Street: My New Orleans Story. It's really about home, not a house. What happens to her green silk Chinese Chippendale sofa becomes irrelevant. 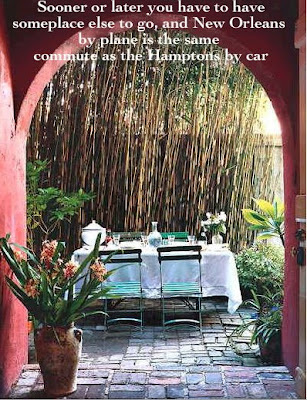 Reed calls her earlier French Quarter digs (shown here above) a stage set: a place for having fun. The house on First Street is also the site of great times -- better times -- but it's about growing up and getting involved. Of course the ride includes plenty of mouth-watering food and good laughs. 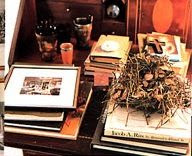 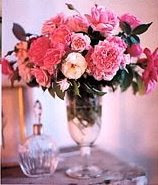 Keeping in mind that the focus of the book isn't decorating, (although looming large is her turbulent renovation of a lovely 19th century Greek Revival house with amazing Greek key windows) here is a passage I think many of you will relate to:

"I'd been preparing for owning some house, somewhere, sometime, for so long that I'd saved every World of Interiors and House & Garden magazine since I was twenty, moving them in increasingly battered boxes from apartment to apartment, city to city. I'd been carrying around a swatch of Bennison's "Crewelwork" linen like a talisman for almost fifteen years; I was well versed in the subtle differences between Farrow & Ball's "Straw," "String," and "Matchstick" paint colors. More than a year before we laid eyes on the house, I had bought (on the layaway plan at a local antique store) the parcel gilt bamboo Regency benches I knew would go in the front parlor. As a child, I never cared a whit about Barbie, it was her dream house I was obsessed with. Now I had my own."

oh my goodness, now i want more!
i can totally relate on the barbie deal. for years, my barbie dream house was a refrigerator box that i had divided into 3 levels, made stairs, added wallpaper and all.
delightful!
can't wait to read about her 'home'!
thanks court!
erika

erika -- wish you had a picture! I turned what was supposed to be a stacked cubby system for storage into an apartment complex for my Barbies :)

I'm back, I need to get a life and get off line :). Courtney, if we had been neighbors it might have been dangerous. Competition-wise, that is. Over who had the better Barbie dream house. Barbie apartments? Now you are on to something. These could potentially sell like hotcakes. I'm envisioning stackable cubbies that can be customized... hmmmm. Toys-R-Us are you reading? You could be on the brink of "The Big Idea" with Donny Deutsch. :)

Thanks Courtney, love this passage and need a book like this to read : )

Love that passage! this looks like a good book.
How nice to sit and read a book... I'm trying to... not easy...

Fifi, Robyn, I think you will love it!

Your recommendation on anything rates highly...but passage you chose to highlight clinched the deal. "House" is now on its way from Amazon to me, thanks to you!

It sounds like a wonderful book. I am sure it's bitter-sweet.

Meg -- it is truly a Tale of Two Cities.

You are quite a salesperson - wasn't sure I needed this for the library, now am sure that I do. Funny how we can find time for other things when deadlines loom.

Hi style court
I just purched-The House on First Street this past Tuesday, when it was released. I am still reading but almost done & was up very late Wed. night, as well. My Hubby is from New Orleans & after discovering (Vogue) the book was coming out I had to grab it! I even order a copy for my father-in law for his B-day. Anyway, love your blog & I recenly started my own & spoke of Julia 's new book & about my good friend & her family who had to move due to Katria.

Thanks for stopping by! It is a great book isn't it? I'd been waiting so long for it. Can't wait for the release of the second title in a few days.

Oh yes, her entertaining book. Also, wanted to let you know Patrick Dunne the owner of Lucullus has a great book - "The Epicurean Collector" that you may want to check out! It came out several years ago- I was able to pick it up while visting his store.

Lisa -- thanks for the reminder. Great book.