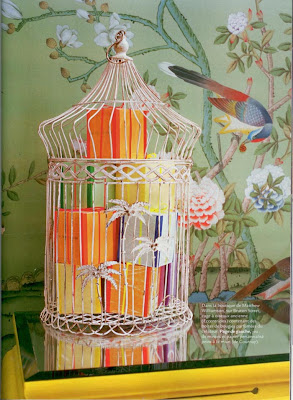 [Photo by Pascal Chevallier]
Chinoiserie -- design based on Western fantasies of Asia -- is a vast decorative phenomenon. It's been coming on strong since the 17th century. And as so many recent magazine pictures -- like this December 2007 AD France vignette of Matthew Williamson's London boutique -- have shown, it's still an alluring force in the 21st century. But have you heard much about Europeanoiserie? 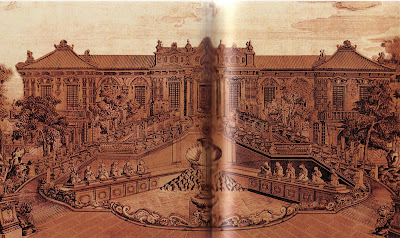 Fashion designer Vivienne Tam was born in mainland China but raised in Hong Kong, and she has resided in Europe and America, so she has a particular fascination with cross cultural pollination. In her book, China Chic,

she speaks of "Europeanoiserie." This is the flip-side of chinoiserie.

During the 18th century the Qianlong emperor built European-inspired palaces as part of the famous complex, Yuanmingyuan, or "the Garden of Perfect Brightness." Located in Beijing, these palaces were based on Versailles with marble arches and mechanical fountains. It was, according to Tam, the emperor's way of possessing everything the West had to offer. The engraving above shows the European influence in Beijing's Haiyan Hall, but the roof had Asian flair with multi-colored Chinese tiles. (Image courtesy the Palace Museum of Beijing.) 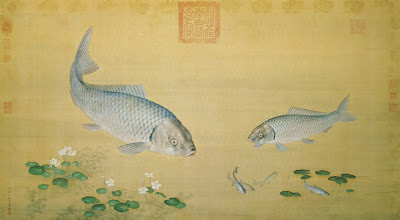 In 1860, after the second Opium War, the British burned Yuanmingyuan. Today the ruins are a tourist attraction but the site obviously holds painful memories. 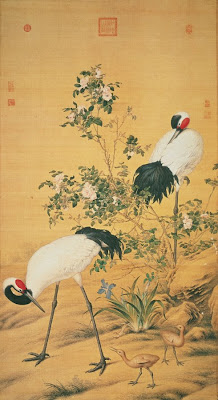 Qing court painter Giuseppe Castiglione, an 18th-century Italian artist recruited by the Chinese to serve in their palace studio, also advised the emperor on the Western-inspired structures. (The painter's work is shown here in images three and four.)

Castiglione taught Western techniques: naturalistic shadowing, linear perspective. So, as mentioned in a past post, the work that came out of that period is an interesting mix of refined Asian brushwork with Western-style realism. He was known for his large-scale compositions and master draftsmanship, and he eventually adopted the Chinese name Lang Shining. 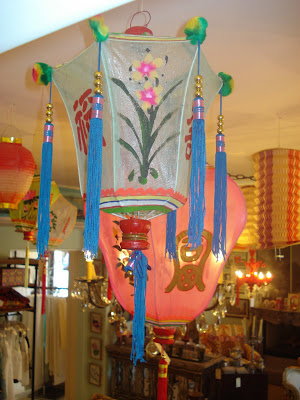 Speaking of chinoiserie at its most whimsical, gracious Julie of The Grand Tour just sent me a sample of her in stock lanterns.
Posted by Style Court at 8:10 PM

Wonderful bit of "histoire!" In my last life, I must have painted Chinoiserie, because I love it!

Patricia VE -- glad you enjoyed this one :)

Breathing -- thanks, it is an intriguing subject.

So interesting, and something with which I was not familiar. Great introduction!

Well, it's big deal to mention something new to Jennifer and to all of you well-read readers, so I appreciate the positive response :)

How do you do this???? I kneel before the Empress.

homer -- you are too kind. thanks.