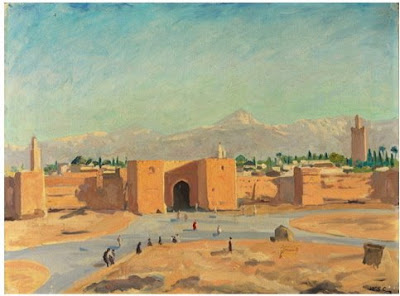 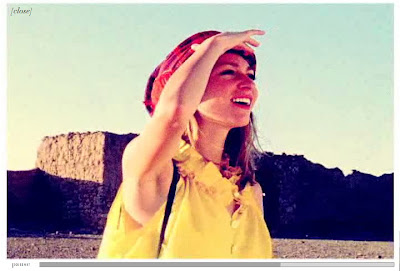 Initially I wanted to mention the Andy Spade and Anthony Sperduti short film for J Crew, The Exchange. But I figured it would be all over the blogosphere by the time I got to it. So instead, I'm drawing attention to Sir Winston Churchill's painting, Marrakech, given to U.S. President, Harry S. Truman, in 1951.

Enamored with Morocco since the 1920s, Churchill had some moving experiences there in the desert during World War II. After the Casablanca Conference of 1943, Churchill persuaded Franklin Roosevelt to make an arduous journey to see the wonder of the sun setting over snow on the Atlas Mountains. A passionate painter, Churchill captured the scene and later in the 1940s depicted other Moroccan landscapes. The gift to Truman was auctioned by Sotheby's in December 2007.
Posted by Style Court at 6:00 PM

I just watched the video of the exchange and thought it was very sweet. I am curious about the growing fascination over Morocco in the US, is this something new or has it been brewing for a while?

I'm in cairo and having lived in NY previously I don't feel there is a draw to egypt from the USA as there seems to be to morocco, but that could also be a matter of distance as well, not sure...

Hi Cleopatra,
I think the West has been fascinated by Morocco for a very long time, but also intrigued by Egypt. Museum exhibitions of Egyption art are quite popular here.

I too just watched "The Exchange"..I am a big J. Crew fan, but prefer the "Marrakech" painting. I like the colors and the serenity of the painting!

this is why your rock. you always find an entirely different angle. lovely, thank you!

HI - I've never seen that painting, let alone heard of it - thanks for the history lesson!