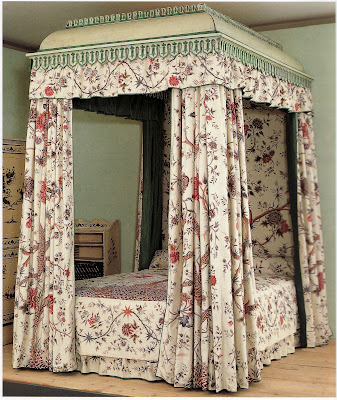 The 18th century had celebrity couples too. It seems London's most fashionable was actor David Garrick and his wife Eva. Like the rest of their chic British peers, the couple craved chintz imported from India (originally a hand-drawn, resist-dyed cotton).

Notes Rosemary Crill in Chintz: Indian Textiles for the West, this fresh, lightweight, exotic fabric caused such a sensation in Europe that traditional English weavers faced financial jeopardy. In response the British government imposed a ban on chintz, but the fashionable crowd continued to buy it from smugglers. The Indian chintz shown at top, bought by David and Eva, was initially confiscated by customs officials.

Apparently though, the performers' clout enabled them to get back their precious fabric because it was hung on their Chippendale-made four-poster bed, and today belongs to the V & A. 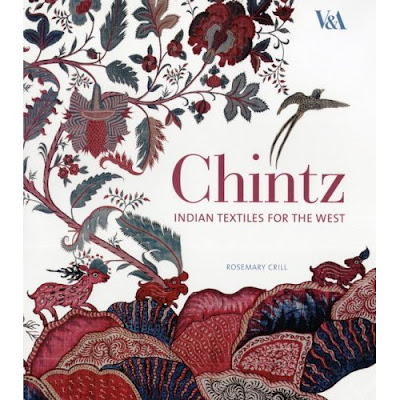 The second image above shows a detail of a 17th century cotton bed cover imported from the Coromandel Coast. Here animals and flora associated with China and India have been interpreted for a Western audience.

To learn more see Crill's book. All images copyright the V & A. 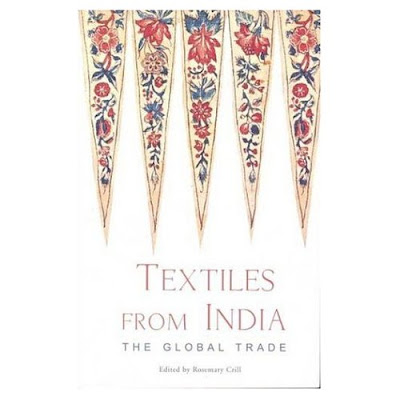 I'm thinking of adding another Crill title to my library, Textiles from India: The Global Trade.

Does anyone already own it?
Posted by Style Court at 7:22 PM

this post made me giggle what kind of self respecting cut throat smuggler makes chintz his contraband of choice? i can see an snl sketch about this in my mind

In Provence , France we have a lot of XVIII th century fabrics that come from India , we call them les indiennes ..and I love them . I use them a lot and also reproductions

melania,
I love the French tradition of les indiennes.

As for the 2 books you have mentioned by Rosemary Crill, they are largely based on the private Tapi collection in India and ofcourse some from the the V&A. Many pieces are repetaed in these 2 books and the third brilliant book- Temple Trade and Court which she co-wrote for the Tapi Collectors. You can perhaps buy that instead, as it has a wider selection of Indian textiles. I love the book.