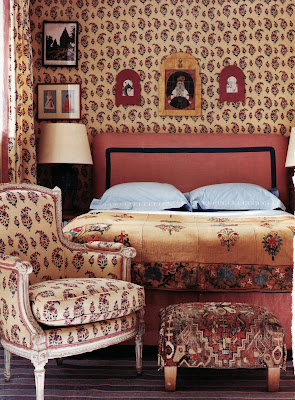 Remember the Myers-Briggs? (The Jung-based personality test that determines whether an individual is fundamentally extroverted or introverted, a feeler or a thinker and so on.) Well a designer friend of mine believes that when it comes to interior decoration, everyone is essentially English or French. 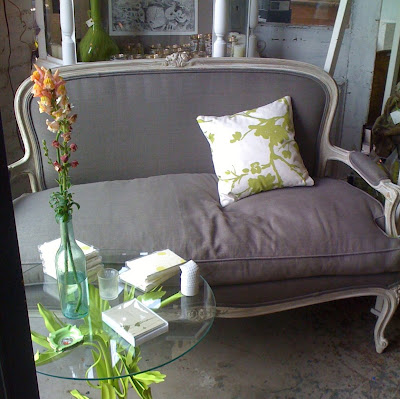 She thinks someone with "French" taste would leave this settee from Providence as is, in its understated "Dior" grey, and maybe use in it a monochromatic room. An "English" person on the other hand would recover it with a pattern or mix it with a riot of other prints. Something along the lines of this. 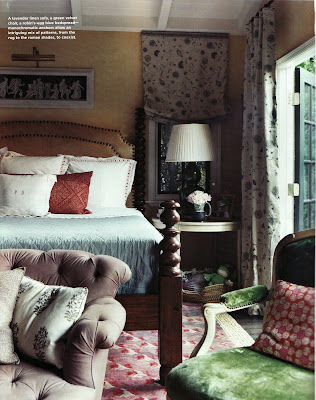 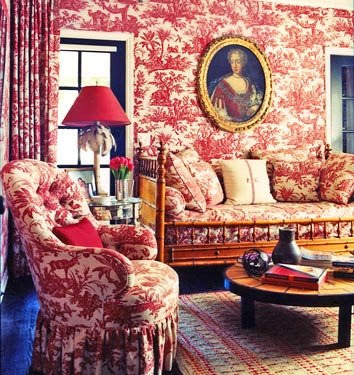 However the French and English labels are imperfect, and a little confusing, because the French love pattern too and they can really rock the all-over print. (Rooms like Dunham's above, enveloped floor-to-ceiling with one print or multiple prints in one color scheme like red-and-white.)

Clearly Peter Dunham pulls from both the English and French, although I think of him foremost as master of the layered, well-traveled Anglo look. 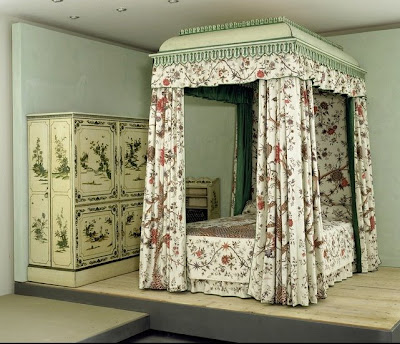 In the 18th century both the English and French favored printed chintz and stylized florals imported from India. And beds in both countries were lavishly draped with fabric. A quintessentially British example is the four-poster Garrick bed made by Thomas Chippendale for the Thames-side villa of celebrated actor, David Garrick (1717-1779). It was hung with Indian textiles and today belongs to the V & A.

Very interesting post, as usual you made me put on my design "thinking cap".

I've always loved designers such as Charles Faudree and Betty Lou Phillips [french], but those types of interiors feel too cluttered in real life with kids. At least for me. In the beginning of my career [mid 90's]I gravitated to Nina Campbell [english].

As I grew and developed, I came full circle to the look I originally loved: a touch of French with a mostly clean and crisp feel. I have to watch out because I'm feminine and could get really into something like a nice faded Cowtan and Tout floral. So I force myself to keep it to a pillow or two.

These days the only floral I have is from a line out of Lee Jofa and it's extremely modern. It's on my kitchen cafe curtains. I'll be posting on that soon. It seems I'll always have some touch of floral in any space in my home.

Sorry so much info, dang this was a novel.

Seleta, I'm having trouble linking to your blog. Could you give me the address?

Thanks so much for sharing all your thoughts!

I think many people are drawn to aspects of both :) I guess some people essentially like harmony -- even with loads so color or pattern -- and others like a bit of chaos.

Great post! I was just recently reading that story in H&G and he said he was raised in Paris, although his bio says he has lived in France, England and Spain, most recently in LA. He is one of my favorite designers and when I read about the French connection, I knew why! As you say, his style is a mix of all these influences.

Very interesting post. i read something recently in an English shelter mag about how the british have affection for french design and almost always have a french piece or two in their homes.

Interesting argument... I would say I'm a mix of the two. I think I like to incorporate certain elements of both styles, but the result is rather American. So can I be a devotee of all 3??

American definitely should be a category all of its own!

Great point. I guess Parish-Hadley was a leader in defining the American look.

sorry for delay in this response!

I LOVE the colors of that couch at Providence. I saw it when I went in there recently. Reminds me of the neutral tones at South of Market!