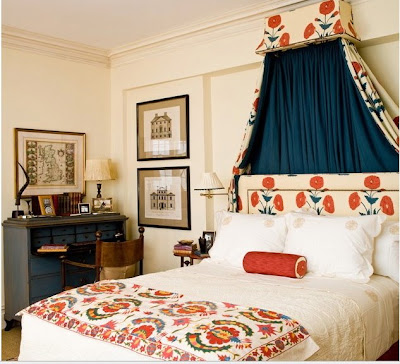 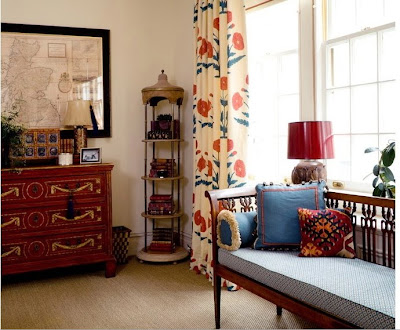 I'm crazy about this Sara Gilbane-designed bedroom. True to her "classic-modern-traditional" aesthetic, she has infused an otherwise understated, elegant room with a bold, youthful poppy print: Brunschwig & Fils "Lallarookh" cotton-linen in red and blue -- one of Sara's faves. Often coronas like this are done-up in rather matronly fabrics.

Gilbane graduated from Brown and went on to study at the Rhode Island School of Design. You may have heard her name because she worked for six years with acclaimed designer, Celerie Kemble. Recently Gilbane opened the doors to her own West Village firm. 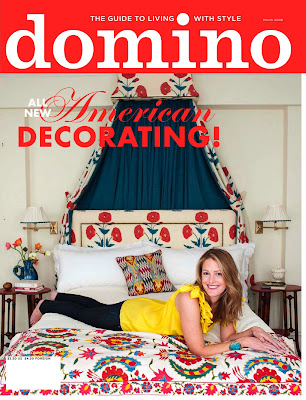 Sara was later photographed by Max Kim-Bee in the high-spirited room as one of domino's top 10 designers to watch. (I'm told this could have been the April 2009 cover.) She has permission to share the picture, so I'm posting it here. Isn't it a striking shot? And by the way, now she's Sara Gilbane Sullivan. 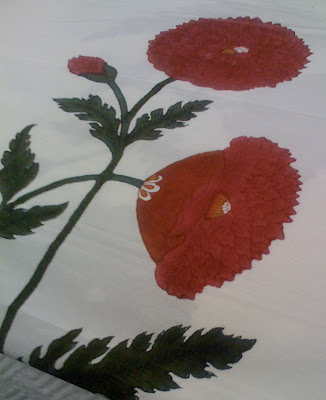 For a similar poppy print available retail, visit Aleta online. You can bet I'm now in the mood to have a headboard or ottoman made from the yardage I recently scored on sale.

I can't get over the artwork and THAT FABRIC! So inspiring! Thanks for introducing me to her!

she is SO TALENTED! Her website is to die for. would love to see her west village place!

I love this bedroom!! The colours, the furniture, and the prints on the walls all look great together. Love your blog!

Thanks Emily! I agree Sara has a great eye!