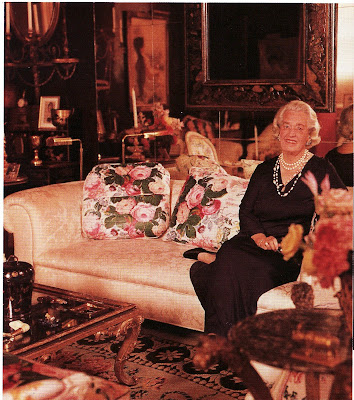 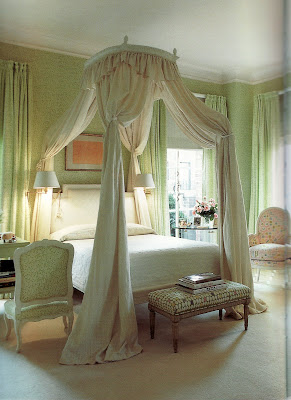 Sister Parish loved handicrafts -- needlework, basketry, quilts, hand-printed textiles. Maybe this was because she enjoyed working with her own hands, doing decoupage and other crafts. Or perhaps she had seen her share of grand formal homes and longed to warm them up with homespun touches. 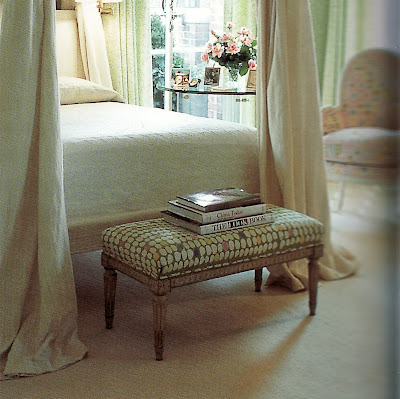 Working intuitively, and in collaboration with partner Albert Hadley, she often upholstered exquisite 18th century French furniture with "primitive" hand-waxed cotton batiks by Alan Campbell. The fresh and inviting bedroom of Brooke Astor, shown above, is one example. 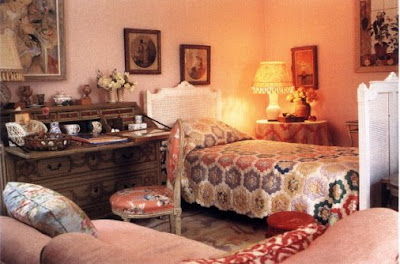 Colorful patchwork quilts appealed to Sister too. She used them conventionally but also commissioned the Freedom Quilting Bee in Alabama to create a patchwork fabric that, according to her protege Bunny Williams, was used in a chic Georgetown dining room. In fact, Parish-Hadley became known for upholstering wing chairs and sofas with quilts. 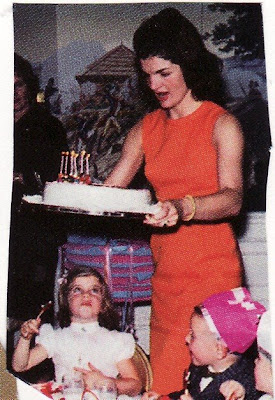 During her famous refurbishing of the White House, Jackie Kennedy selected Morgantown glassware produced in West Virginia. A political gesture? Probably. But JBK seems to have had a genuine fondness for American crafts. The way she and Sister Parish mixed the ultra-refined with the rustic greatly influenced residential interior decorating in the U.S. for decades. 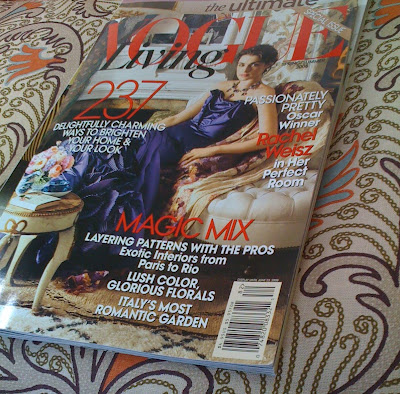 I couldn't help noticing that both Natalie "Alabama" Chanin and craft artist Nathalie Lete received coverage in the newest Vogue Living. Are arbiters of high style embracing craft again as they did in the 1980s when simple pine furniture was mixed with lavish florals?

Of course, in their own unique ways Jonathan Adler and Lulu de Kwiatkowski have been doing a 21st century mix of sleek with rustic. But it will be interesting to see if more contemporary designers -- those associated with modern glamour -- inject homespun elements into their interiors. 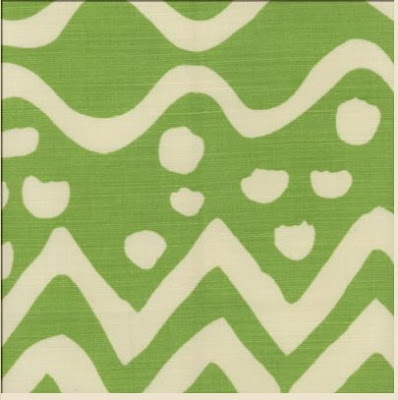 Reminder: Tradition/Innovation: American Masterpieces of Southern Craft and Traditional Art remains on view through May 18.

The Astor bedroom is from Albert Hadley: The Story of America's Preeminent Interior Designer;

and Sister Parish's Maine bedroom is from Designers on Designers.
Posted by Style Court at 9:45 AM

I certainly hope so. I love that Sister did decoupage. I think that sometimes we forget that handcrafted items can be quite sophisticated.

Growing up, I learned to sew, decoupage, needlepoint, embroidery, ceramics, "macrame", draw, paint, even make slip covers, as we were never allowed to be bored. I sewed my first dress in third grade and loved it!
I am so thankful that I learned all of these from my own Mother. It was really natural for women to just know these things. I inherited some wonderful fabrics from my Great Aunt, some things unfinished which I did complete. They are so special.
Your post makes me appreciate the art of home-spun next to polished and sleek items.

Patricia and Jennifer, it's great to get your perspective! And I agree with all your points. Thanks.

I think hand made will make a comeback at some stage because of mass production - people still want the stamp of a person or individuality on their possessions:-)

THANK YOU!!! You did it!!! I have a very old ladyish dining room set-- wheatback chairs, etc. I keep trying to figure out how I can update it-- your "Contessa" fabric would be perfect on the chairs. Would you mind sharing the price on that beautiful fabric so I don't make a fool of myself by trying to order it "through the trade" if there is no way I can afford it? Thank you-- you are so inspiring!

Hi Anon,
Glad I was helpful! There is a 3 yard minimum on Contessa. Price depends on whether it's retail or wholesale, but I would say ballpark $150 per yard. Again, it depends on how you are able to purchase it.