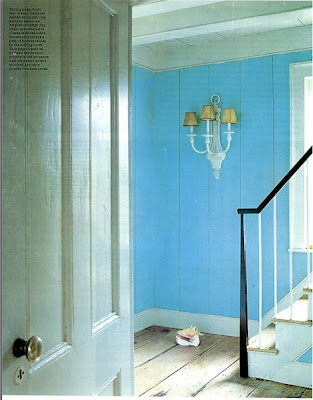 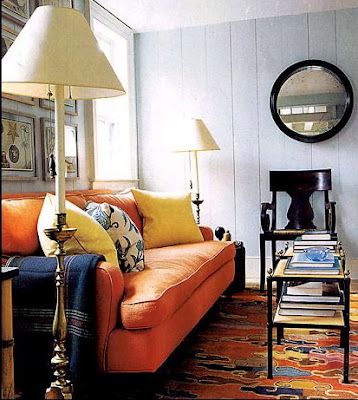 A reader has asked me to track down a rug similar to the vibrantly colored one used here by Steven Gambrel. Originally it was seen in the designer's country house, part of Elle Decor's September 2001 feature, "Yankee Hip." The magazine actually did a string of stories early in this decade that highlighted Gambrel's distinctly American style. 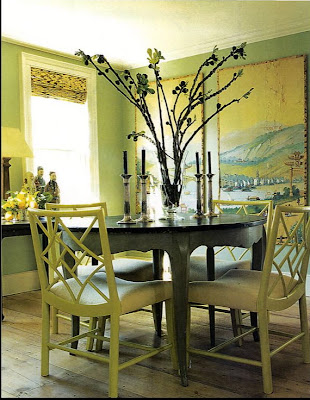 This also happens to be the same 18th-century Sag Harbour home later occupied by J. Crew's head of marketing, Margot Brunelle Fooshee, and her husband. You probably remember Ruthie Sommers did the decorating on the second go-round, but here's a refresher, below. 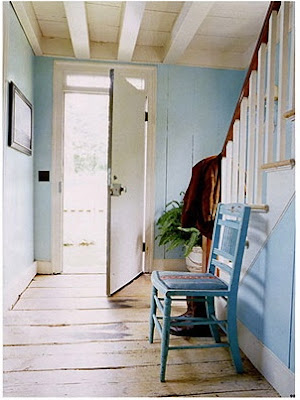 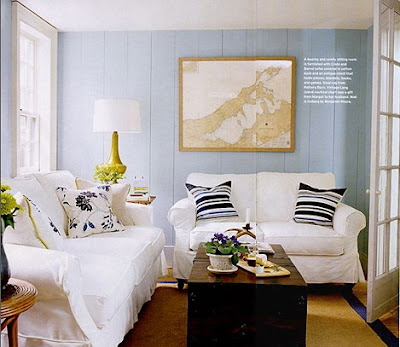 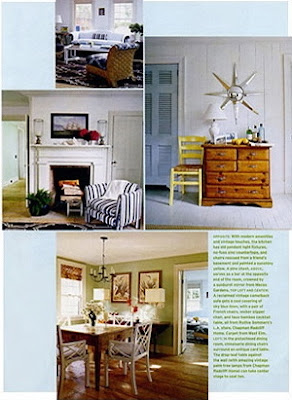 Yes, I remember this well!!! Love both vesions.

i love the blue walls in the first picture - the color is so vibrant!

If I weren't already stopping by everyday, I would now for this double helping of SRG. I hunted for that rug to no avail! Maybe it will come to me.

It's really interesting that Sommers appears to have left Gambrel's colors in place. they must be spectacular in person in Sag Harbor's light.

That is a fabulous rug! Let us know if you have any luck tracking it down.

I will! I'm still on the case.

That's a really interesting connection; I didn't know they were the same house.

I really appreciate you making this post about the rug; it really struck me when I saw it. I've searched online a bit, but I'm a little nervous about the cost. I have a hunch that it's going to be quite pricey to get a similar rug;) I do think some rugs should be considered as a bit of an investment, but even an investment has to be within your personal budget. We'll see, though!

Recently, I was looking at Markham Roberts portfolio and saw another interesting, red-orange, vibrant rug ( http://www.markhamroberts.com/portfolio/smith11_lg.jpg ). The geometric qualities are different, but the colorway is similiar with the mixture of warmth and cools. I emailed his firm about it, but never heard a response.

Great minds do think alike! I was just digging through my files last night to find this exact photo to look for this type of rug for a client. While doing some research online this am, I remembered seeing the photo on your site. I am fairly certain that the rug is Tibetan (either old or new) based on the design and is similar to the Ningxia(sp?) style of rugs which are my current obsession.

Julie, it looks so Tibetan to me too! And I think, like many Asian things, it may be an old design even though it looks so mod.