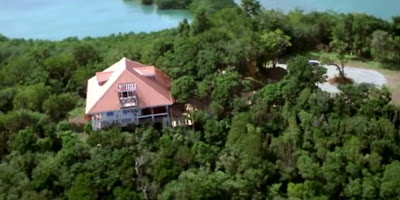 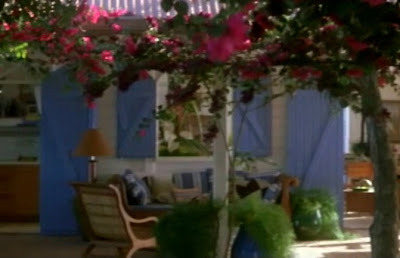 If I were organizing a fundraising designer showhouse, or even producing a magazine story, I'd ask a handful of my favorite decorators to share their own take on the island hideaway seen in 1999's The Thomas Crown Affair.

Although little of it is actually shown in the movie, this intimate house is one of my favorite film residences (among contemporary pictures.) I guess the appeal lies in the idea of it. Wouldn't you like to see what Tim Clarke or Schuyler Samperton would do with a place like this? Or maybe I should say, who would you choose to decorate it?
Posted by Style Court at 12:45 PM

I agree--this is one of the best fantasy hideaways in film. Can I nominate myself? I just want to visit. Do I get to wear Rene Russo's wardrobe while I am at it?

Mary McDonald. This is one of my favorite movies. I prefer it to the original.

Oh, thanks for reminding me about this beautiful place in that movie! It was truely romantic wasn't it!! (I would actually like to decorate it, pleeeeaaase!!!LOL)
XX
Anna

I love the original too which was shot in my old neighborhood of Beacon Hill in Boston. The remake was pretty fabulous though. The island scenes were shot on Mustique and the clothes were all from Celine. Can't go wrong with either of those things!

I agree, the original is so cool.

I'd love to see Tom Scheerer do the island hideaway. His own homes and others in the Bahamas (Lyford and Harbor Island) and the place he did in Hobe Sound, FL, are, to my eye, the perfect tropical escapes.

Oh yes, Tom! His island work is amazing. And I'd love to see Mary's take too.

What about Dr. No's hideaway - I just love the sixties and any of the villians' pads from James Bond!

This place has Anna Spiro written all over it - I can see her decorating it :-)

Yes, the best lairs are in the Bond series :)