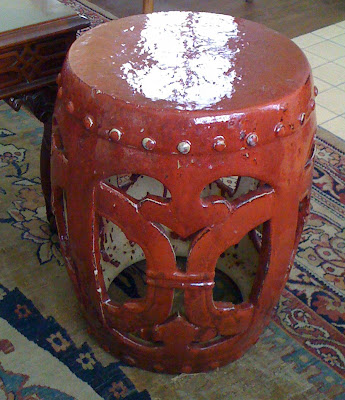 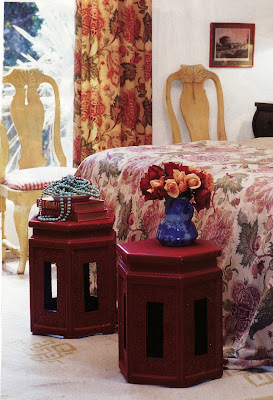 Several readers are searching for Asian garden stools similar to the red ones, above, used often by Mary McDonald. One source sited for "Mary's" stools is Ceylon et Cie. There the stools were priced around $2,600 per pair. Looking for an alternative, I still haven't found an exact match. But the option shown top, from Mandarin Antiques, is sort of a distant cousin (twice removed.) It's a lovely cinnamon-rusty-red and costs just under $500. 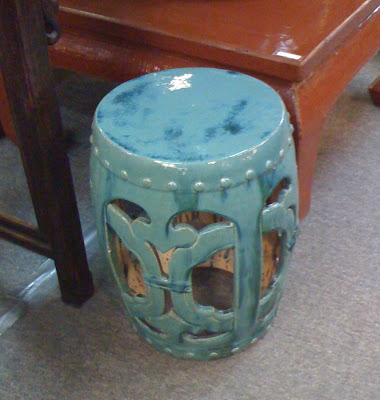 It is also available in a gorgeous turquoise. Mandarin is located in Atlanta at 700 Miami Circle.

Did you see the one on sale at West Elm- it totally does not have the cool pattern, but it has the shape and great color and for $59 its a bargin.
http://www.westelm.com/online/store/ProductDisplay?partNumber=WE-PRODf739&storeId=17001&langId=-1&catalogId=17002&viewSetCode=E&parentId=WE-SH1SLEFRN&retainNav=true&cmsrc=WE-SH1SLEFRN

I think the West Elm color is great, and Gumps always has good looking garden seats!

those two red tables aren't garden seats - they are carved wood. Here are a few ideas. The last one is pretty spot on - just needs red paint!!!

I knew Mary's are not ceramic but some Chinese dealers describe their wood pieces as garen stools too. The reader just wanted something red in a similar form.