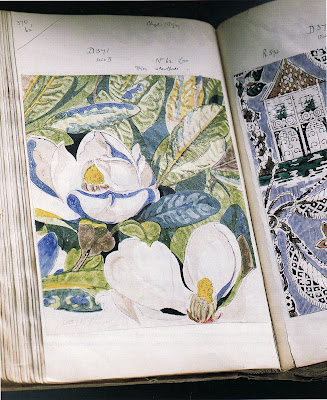 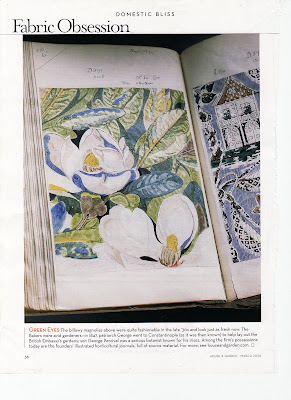 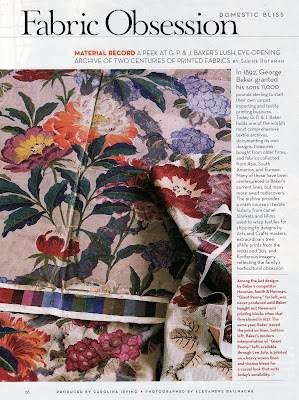 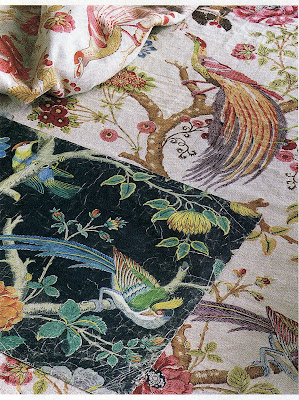 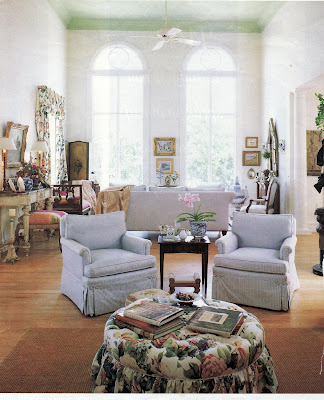 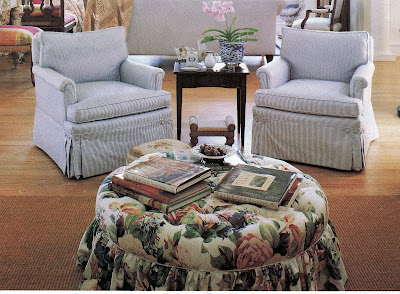 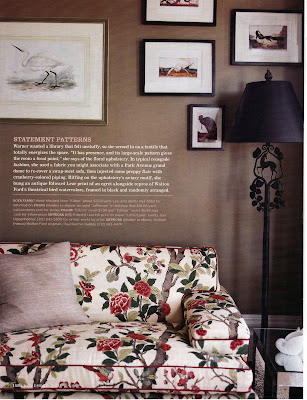 Over the weekend I was revisiting my Chloe Warner tear sheets, thinking about how Warner successfully covered a swap-meet sofa with Lee Jofa's stately hand-blocked linen,"Eldon." Along the way, I uncovered other examples of lush florals.

Images one through four are from a March 2006 House & Garden story, produced by Carolina Irving, about venerable G.P & J. Baker's archive of printed fabrics. (Click pictures to enlarge and read text.)

Images five and six represent a page ripped from Southern Accents. I think in the 90s. To me, the pouf shown is just an iconic flower-laden piece. Maybe chintz. The room is sort of like a de-constructed Southern classic. Lighter than the '80s but still a bit grand.

Last of course is Warner's library as seen in domino, November 2007.
Posted by Style Court at 2:42 PM

I've become obsessed with flowers as of late so this is just heaven sent! Just beautiful, thanks!

The H&G article is one of my faves- the fabrics featured are gorgeous!

I love one big overblown floral in a room. Just one. So pretty. Thanks for these, I could look at fabric all day.

Your ability to zero in on very nice florals is right on. The right floral used the right way is design magic-witness the wonderful
Warner sofa!

I love GPBaker linens - after Bennison, whenever I need a great linen - I head for Lee Jofa - they can not be beat!!!! I well remember that article from s.a!

Joni, if you endorse Lee Jofa, that says a lot for the high quality!

i've always loved the botanical in a fabric. i have a little swatch that i've carried with me for years to try and find something like it. and guess what...it's that last photo!!! too weird!

Great post Courtney!! I just love all of these photos. I like the lighter than the '80s but still grand look!