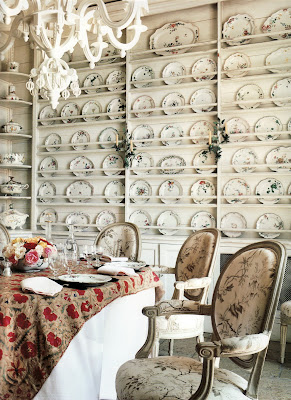 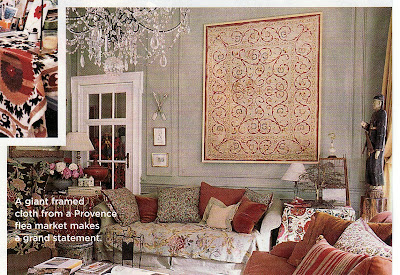 I new the day was coming. Suzanis placed at the foot of a bed have become so overexposed that The New York Times just put them on its "Over?" list. (See Fairfax's post for details.) Of course, it's important not to take lists like these too seriously, but it seems sad when centuries-old pretty textiles are lumped in with pink resin deer. (And, yes, I know a lot of those new brashly colored suzanis weren't so pretty.)

For everyone who's a genuine fan of the embroidered pieces -- or just spent a small fortune on one -- I thought I'd share a few supremely timeless rooms with suzanis draped on tables. 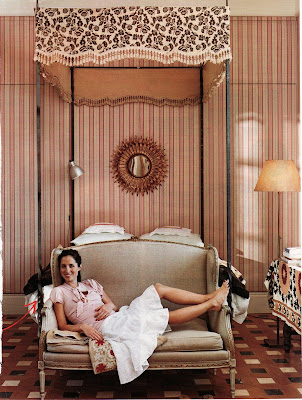 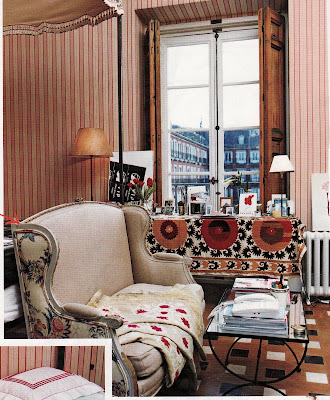 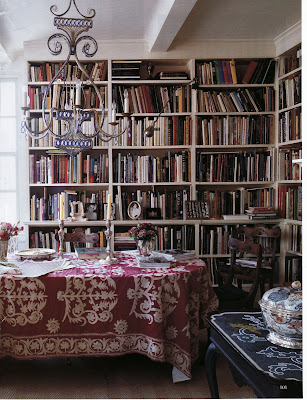 I don't know. Yes the bright sixties shock effect of the commercial suzani is over, but the really fine textiles used in a textile collector/layered bohemian style.. I'm not tired of the look; you don't sound like you are, and reading between the lines about this article, most people still seem regretful to part with the "trend". Suzani are still handmade unique works, not really available as catalogue items(the real ones), unlike Hollywood regency mirrors, faux deerheads and so on.

I really like the photo with the wall of plates, what a great look.

Style Court said...
This comment has been removed by the author.
12:13 AM

Fabulous textiles are fabulous textiles in my opinion - navajo rugs, certain animal skins, suzanis, ethnic embroidery, needlework, etc. Imagine if we panicked and switched out our favorite things every time someone said something is "out"!

I agree with you Courtney! I'm not at all tired of the look ...especially the real deal!

I think that it's the "dumbing down" of trends that kills them. Like the bright new suzanis, or the printed stamped cowhide rugs. Good design will transcend the trends.

Courtney - over the break I will pull out some of the vintage images I have. Suzanis have been a staple for years. We may be a bit saturated for now, but that doesn't take away from the pieces themselves. I have a long strand of big, Chinese turquoise beads that Mr. Blandings gave me when I turned 30. There have been times when I think someone else might see them and think, "Turquoise is SO over." But they are gorgeous, and were given with such love - that is never "out."

I love them as well but it does make me sad that they are everywhere.

omg, please. Not one, not ONE of my friends or family or clients know what s suzani is. Its out because the magazines have showns and written them to death, that's all. don't worry Courtney - Mrs. B is right, they've been here forever and will be still. Ask "regular" people and see if they have ever heard the word suzani.

The photo of Janet de Botton's home with all the plates is just jaw-dropping! Also love the chandelier and the fabric she used to cover the chairs in the same photo!

oh I still love them, have them and want more. In fact, I have a little stack of them on my blog right now. All vintage. But I don't poo-poo the new ones either. A friend of mine who is an expert in Islamic Art and owns the store Sheherezade feels that many of the new suzanis coming out of Uzbekistan are very fine quality.

i think if you're decorating your home go for what you love & you won't care whether they're in or out! :) two thumbs up for mrs. b's post!

I cannot get enough of this library/dining room of Carolina Irving's. LOVE IT. Cote makes a good point. Only designers and design junkies know this stuff exists. The rest of the world has no idea.

For me I will never get tired of them . i will still love them as ethnic and cultural things. they are just timeless . THEY are not over