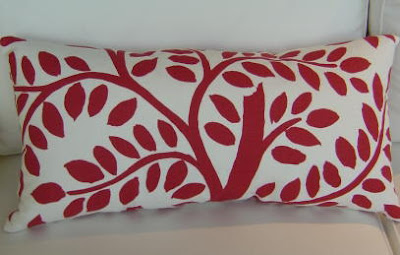 I'll use any excuse to incorporate this pillow from Pieces into another post. The fabric is Matisse-inspired and Matisse was a dear friend of Rosamond Bernier.

Gwyneth isn't the only elegant icon featured in November's House & Garden: Rosamond Bernier receives a two-page spread. I was excited to see the legendary art historian included and thought I'd "re-run" my February post about her.

While working for Vogue in Paris after World War II, Bernier became good friends with Pablo Picasso and Henri Matisse. These relationships helped the young American launch her critically-acclaimed art magazine, L'OEIL, in 1955. Later in the 1970s she returned to the U.S., becoming a celebrated lecturer known for her smart but unstuffy style. She also returned to American Vogue as a contributing editor. Bernier's adventures have included flying her own airplane, raising a small private zoo, and being named for life to the International Best-Dressed List.

A few years ago, I was fortunate to hear a dressed-to-the-nines Bernier speak about Matisse. (All the praise is well-deserved.) She is scheduled to give one last talk at the The Met in 2008. DVDs of her greatest "Live at The Met" lectures, such as The Matisse I Knew, The Matisse Nobody Knew

and Taste At The Top: Francois I, Charles I,

are available too.
Posted by Style Court at 5:17 PM

This pillow is so beautiful! The fabric has such a large repeat, it is amazing how well the person who designed the pillow (I assume it was the owner of Pieces) was able to frame it up!

Great information and I love the pillow !

That pillow is just too pretty for words! I love it!!!

What a life she has. You are lucky to have been to a lecture! Thanks for pointing this out.