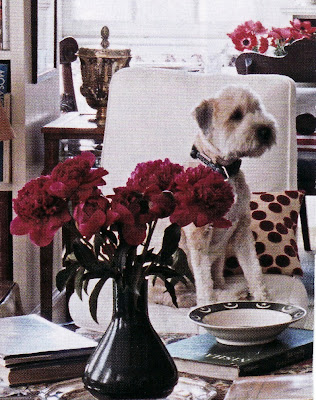 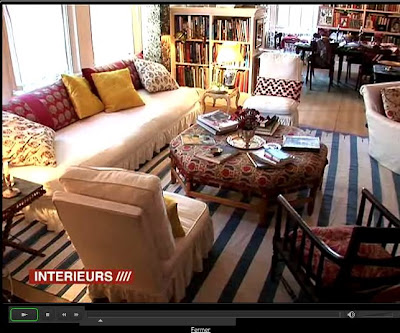 A reader asked if I could identify the red-and-ivory dot fabric, used for a pillow, in Carolina Irving's apartment. It's Clarence House's "Les Pois," shown here behind the cute little dog. (Image cropped from a Francois Halard photo published in Vogue, October 2006.)

The second image is a still from the "Chez Carolina" video, shown on a French site called Interieurs.
Posted by Style Court at 10:36 AM

Thank you!! I am so excited to use this!! You are the best.
A

Fabulous. You are on a roll this week with the gorgeous fabric. I am truly inspired by your posts.

Courtney, I loved the previous post on 'the design library', nice to know there's such a place.Thanks. I also think the second image in this post is a great looking room.

This is a cool blog! I'm so glad I found it b/c I'm giving my apartment a makeover and have become totally inspired by some of your posts.

thanks so much robyn!

thanks brooks. glad you've been inspired :)

What a coincidence! On my subway ride home tonight, I came across this very fabric. It's featured in the Oct/Nov issue of Western Interiors & Design.

Separately, in the same issue there is an article on Molly Leuekemeyer's home. On her sofa, is a pillow similar to the Pieces one using brown & ivory David Hicks geometric pattern La Fiorentina.

I've not been here for a few days and wow! Everything is just too gorgeous Courtney. I love this apartment so much! Where are more pictures of it that I can see. I know there's more, but do you know who's got the most? I adore blue and white dhurri rugs. The first time I saw one used in an english styled home was Houston designer Carol Glasser around 15 years ago. Glasser never got the exposure she deserved. She's up there with all the best, but Houston is just too out of the loop for anything more than Southern Accents or Veranda, I'm afaid.