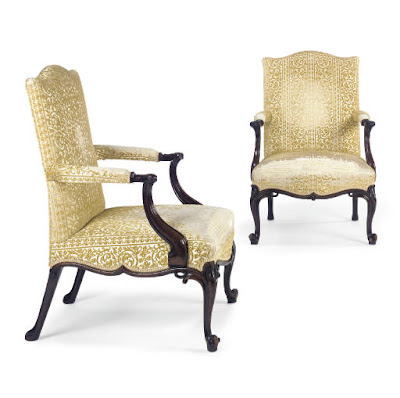 This pair of early George III mahogany library chairs is one of the "stars" about to be offered at auction by Christie's. On October 11, these 18th century pieces attributed to Thomas Chippendale are expected to fetch between $300,000-500,000.

Although the chairs are English, the design is said to represent Chippendale's interpretation of French-style furniture. Typically these featured Chinese or Indian patterned upholstery. 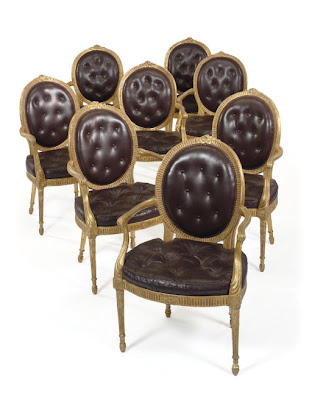 Also up for bid, a set of eight George III giltwood armchairs, circa 1770, from the personal collection of Jeffrey Bilhuber. I love how these are upholstered in button tufted chocolate-brown leather. (It's hard not to add that the chairs feel very Kelly Wearstler. To see how Bilhuber used them, visit The Peak of Chic. ) 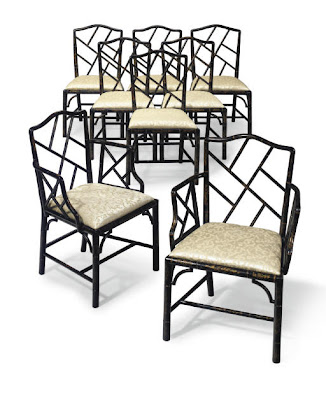 The chairs above are George III-style but were made in the late 19th or early 20th century. This set is included in the upcoming auction too.
Posted by Style Court at 4:22 PM

Email ThisBlogThis!Share to TwitterShare to FacebookShare to Pinterest
Labels: Christie's

Regarding your earlier "elephant" post: go to Atlanta Antique Gallery, then link to Ivory. There is an ivory elephant there you might care for.

Holy crap. You probably don't know this, but I have a MASSIVE fetish for chairs, and this post is LOVELY!!!!!

Thanks much, girlie! Fabulous blog!

I love those George III giltwood chairs. And that leather!!!

all of these are amazing - it would be fun to see them in person, wouldn't it?