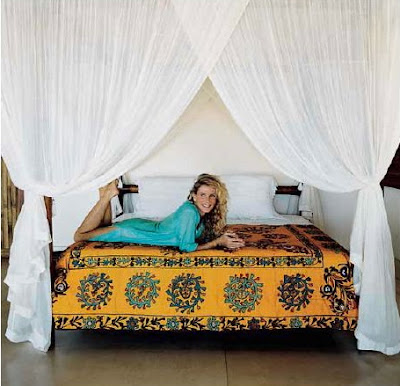 Above, a sneak peek from the October Elle Decor: interesting textiles, such as this vivid suzani, fill the Brazilian home of Valentino's Charlene De Ganay.

Speaking of globe-trotter chic, Exoticism opens November 27, at F.I.T. The exhibition will highlight 250 years of exoticism in fashion, from the age of colonialism to the rise of globalization. Work influenced by Japanese, Chinese, Indian, and North African styles, from more than 40 modern designers including, Yves Saint Laurent, Ralph Lauren, Vivienne Tam, Oscar de la Renta, and Chanel will be featured along with 18th-and 19th-century textiles. 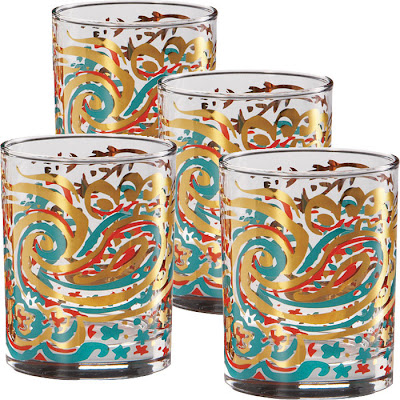 I love Vivre's Indian-paisley-inspired glasses, above. $75 for a set of four.

Oooh, thanks for letting me know the new Elle Decor was out! Wish I was in NY even more now so I could go see that exhibition.

forget the suzani -those white curtains around her bed are DIVINE....

I like the suzani, it looks so modern I wouldn't have guessed that's what it was if you hadn't written it! Oh how I ache to see that exhibit in NYC...maybe I can prevail upon a buddy to let me crash in her pad just to go to it and the MET?!