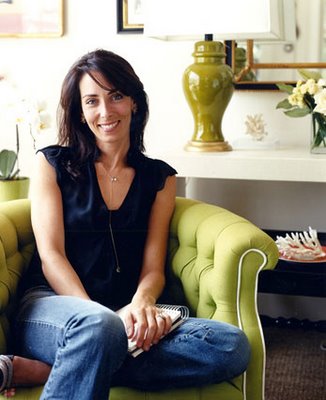 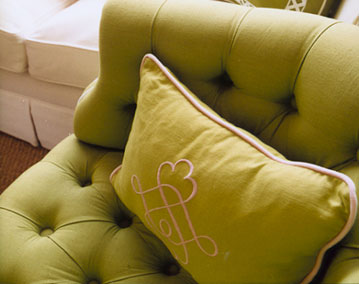 Ruthie Sommers in one of her signature chairs; photos above by Michael Weschler as seen in the January-February 2004 Southern Accents. 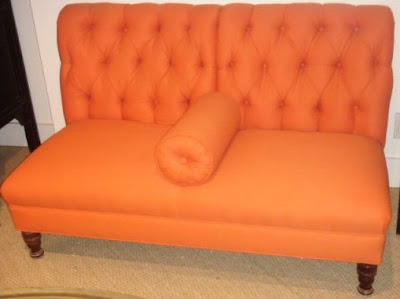 Sofa above available through C. Bell. 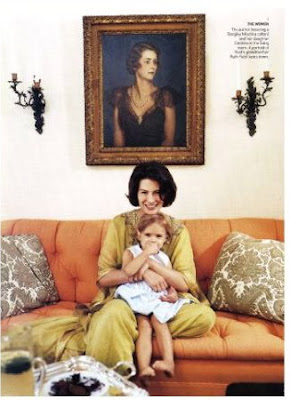 Marina Rust and her orangey sofa, photographed by Francois Halard for Vogue. 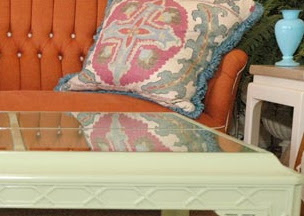 Detail of tufted sofa spotted a while back at Chapman Radcliff.

Inspired by a tufted Victorian sofa newly upholstered in crisp orange linen, that she saw at Chapman Radcliff, a friend of mine is going to recover her great-grandmother's 19th-century loveseat in a similar fabric. My friend liked bright citrusy tones way before they became trendy, so she is fairly confident about the bold hue. (Plus it will really add punch to her neutral-walled rental.)

Simple linens and solid cottons are such a nice counterpoint to rather fussy furniture. More subtle alternatives to bright orange could be spring-green, white or flax. Feels so very Sister Parish!
Posted by Style Court at 5:40 PM

Fun post! I like the orange-y red color in all of the pics as well as the green!

I love the photo of Marina Rust and her orangey sofa. She is such a class act!

I think you're spot on about the Sister Parish vibe!

I am wild about these color pairings! Not for the faint of heart, but such a stylish statement that packs a very cheery punch!