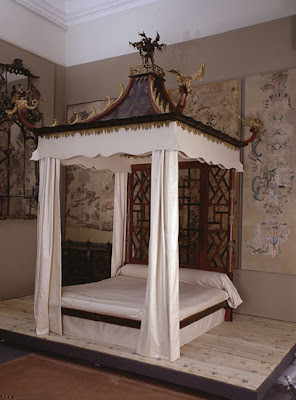 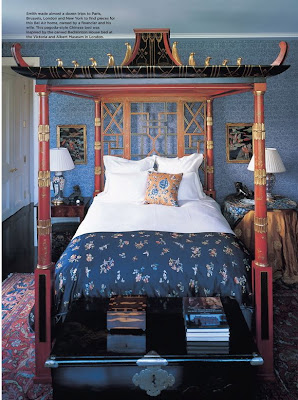 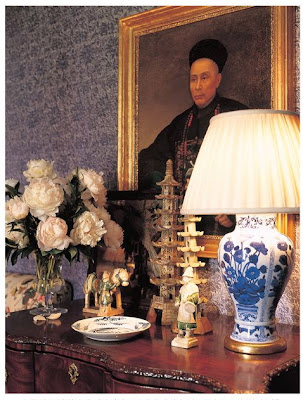 Michael Smith isn't known for doing rooms with a "motif," but he really rocked the chinoiserie theme a few years ago in this California bedroom. What could have ended in disaster somehow works in the context of this stately home.

Whether or not you like Smith's room, the Badminton bed that inspired it is an important piece to know if you're interested in furniture history. Most likely designed by craftsman John Linnell for the Duchess of Beaufort, this red-lacquered bed epitomizes the "exotic" Chinese style that was so popular for English ladies' bedrooms in the 18th-century.

Photos of the Michael Smith bedroom are by Michael Mundy, as seen in California Style Magazine. The interior is also featured in Michael Smith Elements of Style.

I adore that Michael Smith room!

I've seen the Badminton Bed in person and it's truly unbelievable (in a great way!). I do think Smith did a great job with his interpretation of it b/c it's over the top w/o being gaudy!

The more I see the Badminton Bed, the more it grows on me.

Besides beds that he excels in, I love his accessorizing. that tablescape is fabulous. Thanks for including it!