Ahead of the Curve: Southern Accents 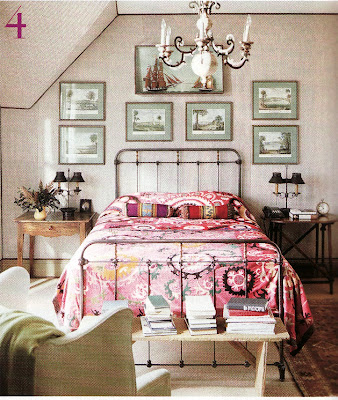 I'm embarrassed to say I'd forgotten about this South Carolina bedroom until it reappeared in the current issue of Southern Accents. When it was first published, I was of course immediately drawn to the pink suzani. At the time these textiles were not seen everywhere -- especially not in the Low Country. The striped walls and framed Jamaican landscape prints add to the sub-tropical charm. (Click to better see the details.)

BTW: Charleston-based Amelia Handegan -- always timeless but a little unpredictable -- is the decorator here, and the room was featured in a special bedroom "book-azine" that Southern Accents put together a few years ago. Click on the word suzani, under labels, for a host of suzani-related sources..
Posted by Style Court at 5:51 PM

I love this suzani Fabric do you know where we can find this kind of ?
Is it original ?
I'm in love with it . We don't have this kind of design here

By the way thank you for adding my blog to your links . I do the same ..I love your blog and I don't know why I haven't done it before

I have loved that photo for years!! Everything in that room just works so well together!

That is a wonderful photo. SA usually is ahead of the curve on these things!