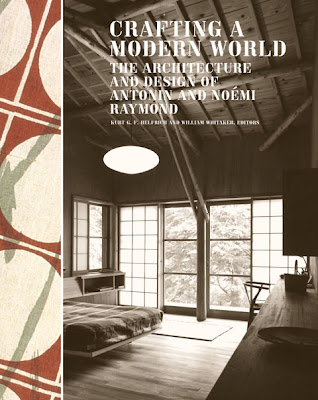 I have to confess, I don't remember studying the work of Antonin and Noémi Raymond in any of my modern architecture courses. But the married designing duo was a serious 20th-century force. (Apparently their romance began in 1914 with mutual attraction to a piece of green-glazed folk pottery.)

The couple collaborated with legendary modern artists, including Frank Lloyd Wright, Isamu Noguchi, George Nakashima, and Fernand Léger. On his own, Antonin Raymond designed critically-acclaimed buildings, churches and schools, which were heavily influenced by traditional Japanese aesthetics and craft. His wife, Noémi, is now viewed by scholars as an under-appreciated designer of furniture, rugs and textiles. She once wrote to her husband, "From now on I want to design the private houses. The boys have no idea of interiors. They are all very busy in appearance."

A new book, Crafting a Modern World: The Architecture and Design of Antonin and Noémi Raymond,

would make an excellent Father's Day gift for dads with a strong interest in mid-century modernism -- especially the relationship between East and West. The text is scholarly and highly detailed, so I recommend it for true design aficionados who want more than a lush picture book.
Posted by Style Court at 12:40 PM