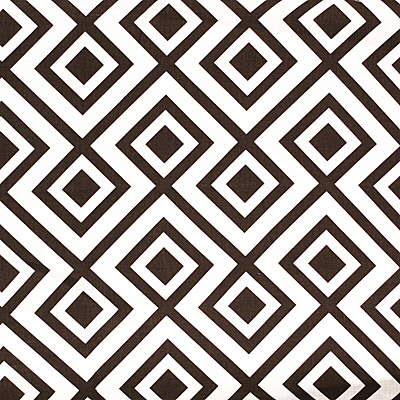 Above, a David Hicks geometric pattern on linen, "La Foirentina" in Ivory/Bark, is just one sample from the many great liscensed collections produced by Groundworks, a division of Lee Jofa. If the pattern looks familiar, you probably spotted it on the June/July cover of Domino; India Hicks has living room chairs covered in her legendary dad's fabric.

An impressive list of interior designers have licensed collections produced by the fabric houses, Lee Jofa and Kravet. The stellar line-up includes Alexa Hampton, Ashley and Allegra Hicks, Suzanne Rheinstein, David Easton, Barbara Barry, and Thomas O'Brien -- just to name a few. Fifteen of these talents will be featured in an upcoming book, Inspired Styles,

scheduled to be released by Assouline in time for holiday gift-giving 2007. I've been told the book's focus will be on timeless rooms, and what inspires these diverse designers to create them.
Posted by Style Court at 11:01 AM

I love this fabric. I have this cover of Domino posted on my blog
for my inspiration this week.
http://patriciagrayinc.blogspot.com/ Loved the fabric on the chairs and thanks for helping to resource it.
Patricia

This looks like a really good one. There are so many great books coming out this Fall that I can hardly stand it!

Can't wait for this book. fyi - I ordered a memo of this fabric for a client who saw it on domino - there is a back-order on the memo until August - the memo! Obviously, that cover had some impact.

This fabric has been in my "I have to use this fabric" pile for some time! I just love it.