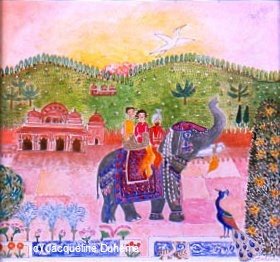 Illustration above by Jacqueline Duheme, as seen in Mrs. Kennedy Goes Abroad. 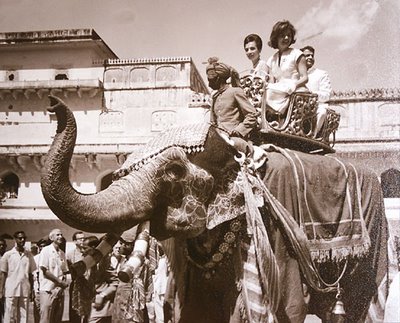 Longtime readers know I love Jacqueline Duheme's colorful series of illustrations that chronicle Jackie Kennedy's travels abroad in the early 1960s. Duheme began her career as Henri Matisse's atelier assistant, and his influence can be seen in her work, but her intricately detailed paintings also seem inspired by traditional Indian miniatures. Below is an example of these exquisite Indian paintings, from Domains of Wonder, an exhibition currently on view through Sunday, March 11, at Emory University's Carlos Museum. Sumptuous pinks, greens and yellows fill most of the 123 petite paintings included in the show. 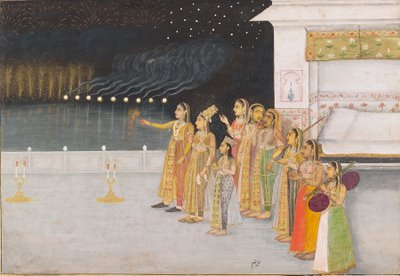 I saw this exhibit advertised and thought it looked so interesting! Need to stop by the Carlos for a visit.

They are just charming!

Elephants are my favourite animal - and these pictures would work beautifully in my home. Thank you so much for introducing me to teh work of Jacqueline Duheme!

Mim, I'm so glad you found something that will work (and that you love.)

If you Google Duheme's name you may find museums that still offer prints or notecards, or of course you could take pages out of the book -- it's not expensive, at least in the U.S.

I really like the Kate Spade for Crane line. It's retro, but with a sophisticated flair.

I love the KS calling cards and the elephants. So cute.

I don't have Mrs. Kennedy Goes Abroad but I do have a first edition of One Special Summer.

Alyssa,
You seem to have so many great special editions and interesting photographs in your collection :)