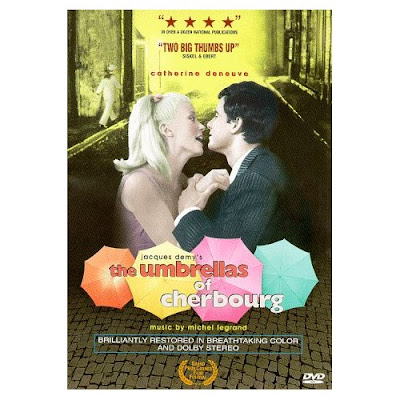 on mute (all dialogue in the movie is sung) but, like me, he thinks the saturated colors of this critically-acclaimed French film are spectacular. The film's colors are actually so intense that the other day I found myself a little mesmerized when I saw it playing on a large plasma screen in the Kate Spade shop.

First released in 1964, The Umbrellas of Cherbourg

stars Catherine Deneuve. With characters' clothes matched to boldly patterned interiors, this movie is visually unique. Definitely worth a look for anyone interested in color theory -- or anyone who just loves high-voltage pastels.
Posted by Style Court at 4:24 PM

I've never seen this film before, but it seems like it is a classic. Perhaps I'll watch it twice- the first time with sound and the second time on mute :)

In response to Kate Spades new line of china, check out Christopher Jagmin.com, I first saw his work in Cottage Living Magazine, now one of my favorites, Anne Coyle Interiors is featuring his plates in her store. Love it

my late father and i loved this movie. he was all about colour and beauty and his passion for life introduced me to so much life altering beauty. we never actually admitted to anyone that we loved this movie so i was thrilled to see it on your website. i love your website even more than ever!! thankyou.

I'm so touched you took time to let me know about your connnection with this movie. Thanks for your kind words.