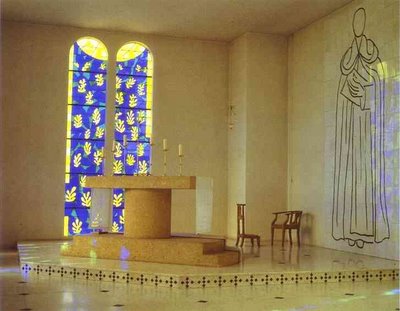 Above, interior of Matisse's Chapel of the Rosary, Vence; Rosamond Bernier was the first writer to cover several major achievements in art, like this chapel, that later became landmarks.

Rosamond Bernier isn't directly connected to interior design, but she is an amazing figure in 20th-century art and fashion. While working for Vogue as a young American in Paris after World War II, Bernier became good friends with artists including Pablo Picasso, Henri Matisse, and Joan Miro. These relationships helped her launch the critically-acclaimed art magazine, L'OEIL, in 1955. Later in the 1970s she returned to the U.S., becoming a celebrated lecturer known for her smart but unstuffy style. She also returned to American Vogue as a contributing editor. Bernier's adventures have included flying her own airplane, raising a small private zoo, and being named for life to the International Best-Dressed List.

I was fortunate to hear Bernier speak about Matisse once, and she lived up to all the praise. A schedule of her spring 2007 talks at the The Met is available on her site, and DVDs of her greatest "Live at The Met" lectures, such as The Matisse I Knew, The Matisse Nobody Knew

and Taste At The Top: Francois I, Charles I,

are available too.
Posted by Style Court at 12:10 PM

Love your site. I would love for you to do a blog of your favorites:

Thanks Sarah! Thanks too for the idea.
Courtney

Dear Style Court,
I am so grateful whenever anyone pays tribute to this elegant, gentle, erudite and utterly delightful lady, Rosamond Bernier. She once kindly received me in her civilized home in NYC in Dec of 2004 when I was doing some interviewing of people who lived in Paris in the 1950's for a research project. And that meeting was one of those memories I shall always cherish for the unflagging conversation that flowed freely from French to Spanish to French then back to English! Thanks for paying her tribute. She deserves all of it!