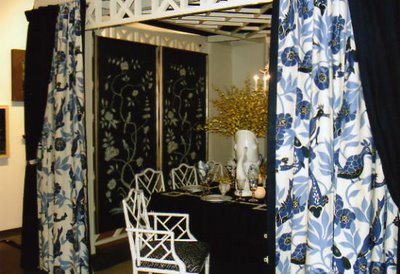 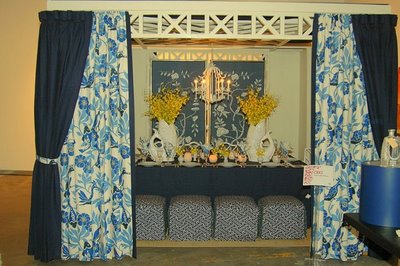 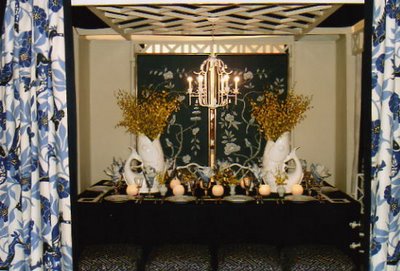 When Kelly Crago Hansen told me that the work of famed British designer Oliver Messel inspired in part her vignette, shown above, for last month's fundraiser Dining By Design, Atlanta, I was intrigued and wanted to share more highlights here.

Interior design was a second career for Messel, one of England's most celebrated costume and set designers during the 1930s-50s. In the swinging 1960s Messel escaped to the Caribbean where he designed villas for fun-lovers such as Princess Margaret, incorporating his signature style -- clean white spiced with strong color, elaborate plaster mouldings, Palladian-style architecture, and a general mix of baroque and classical.

I think Kelly truly captured this feeling of easygoing, tropical elegance at Dining By Design. Apart from designing the required tablescape, Kelly created the illusion of an outdoor room complete with a Chinese Chippendale ceiling, a faux bamboo chandelier and cabana-like curtains made from Lulu DK's Paradiso. Those custom-colored bird and vine panels are de Gournay.

Kelly adds, "Part of my inspiration was a project I'm working on at the new residences under construction at Ocean Club in the Bahamas -- this is kind of a dream because growing up in South Georgia, [near the Gulf and Atlantic coasts] I along with my parents loved tabby architecture, which about 15 years ago led me to almost an obsession with Oliver Messel...As far as the blue and white -- it kind of perplexes me because I'm a green freak -- I think I wanted to update a very traditional color pallet. Although now it reminds me a little of Casa de Campo meets South Florida, captiva with family circa 1970s-80s -- updated of course."

While one of the de Gournay panels has been sold, contact Kelly about other pieces from the vignette that may still be available. Email: interiors745@aol.com

Shown below, the exterior of Messel's Cockade House, Barbados. 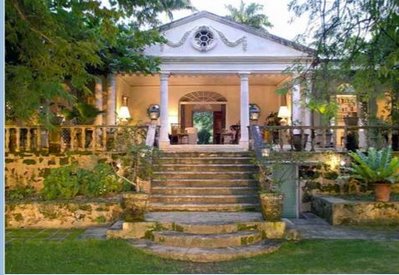 BTW: If you are in Chicago this weekend, don't forget to attend Dining By Design, Chicago. Public table viewing takes place Friday, November 10 and Saturday, November 11 from 10 a.m. – 2 p.m., at the Merchandise Mart. Admission is a $10 donation to DIFFA at the door. Thanks for the reminder Paper Lily!
Posted by Style Court at 7:25 PM

I too love tabby architecture. Glad to find some good info on Messel.